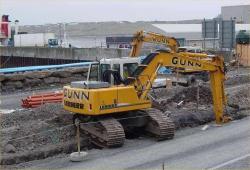 Wick Harbour Authority is making progress with its plans to create a heavy-lift facility on the commercial quay at Wick harbour, with contractors Gunns Lybster Ltd having now begun the work.   The project, and its associated dredging works, was supported by CNSRP partners HIE and NDA respectively and is the first of several proposed phases of work to position the harbour as a key player in the energy sector, with the current focus being on potential to benefit from the development of Offshore Wind in the Moray Firth.
[Civil Engineering Contractors]
12/12/2013

Craig Harvey (21) from Wick in the Highlands, has been crowned Scotland’s top Civil Engineering Apprentice of 2013 at the annual SBATC Apprentice of the Year awards.  The title was presented to Craig at a special ceremony held on Tuesday 10th December at the Scottish Parliament.
[Civil Engineering Contractors]
26/6/2011

AMC Engineering Ltd, whose head office is at Findon just outside Aberdeen, is set to expand their Caithness division by building a new workshop at their site outside Lybster, with the assistance of a grant of Ł76,250 from Highlands and Islands Enterprise (HIE).   Managing Director Andrew Polson, who hails from Caithness and whose parents still live on the family croft at Smerlie next door to the company's workshops, explained that the skill and application of the local work-force was a key factor in deciding to site the new workshop in the north.