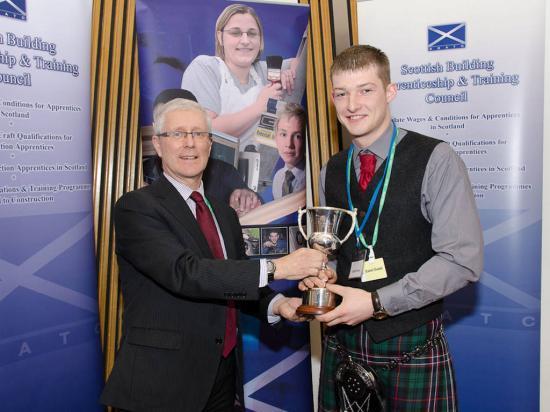 Craig Harvey (21) from Wick in the Highlands, has been crowned Scotland’s top Civil Engineering Apprentice of 2013 at the annual SBATC Apprentice of the Year awards. The title was presented to Craig at a special ceremony held on Tuesday 10th December at the Scottish Parliament. In the Civil Engineering category, the runner-up was Kenna Warren from Moray Council and third place went to Derek Montgomery from Crummock (Scotland) Ltd. of Bonnyrigg, Midlothian.

Winner Craig Harvey, who has an SVQ Level 3 in Construction Contracting Operations, is studying at Inverness College whilst working for John Gunn & Sons Ltd, a building and civil engineering firm based in Lybster, Caithness.

Now in their 14th year, the SBATC Apprenticeship Awards are organised by the Scottish Building Apprenticeship and Training Council (SBATC) to recognise the considerable talents, skills and abilities of construction apprentices working across Scotland. The Awards assess candidates according to their practical and academic ability alongside other important skills such as organisation, communication and the ability to perform in a team.

Speaking at the awards ceremony, Craig said:“When my name was announced as the winner I could hardly believe it. I’m absolutely delighted to have won. I have managed to complete a National Certificate (NC), Higher National Certificate (HNC) and now a Scottish Vocational Qualification in civil engineering and feel I have really found my niche. My apprenticeship experience has really boosted my confidence and given me a valuable set of skills.”

Commenting on the 2013 Awards, Alan Watt, Chief Executive of award sponsors the Civil Engineering Contractors Association (CECA) in Scotland and a member of the Scottish Building Apprenticeship and Training Council (SBATC), said:

“My congratulations go out to the winners and all shortlisted candidates. The quality of nominees at this year’s awards was outstanding and competition in each category was fierce.

“It’s clear that Craig is an impressive apprentice, a valued employee and a dedicated team member. He has an exciting future ahead of him in the construction industry.”

Mr. Watt concluded:“The exceptional calibre of all the candidates just goes to prove that Scotland’s high quality construction apprenticeship programmes are delivering fantastic young tradesmen and women. It is important that we recognise their talents as demonstrating our industry’s continuing commitment to championing excellence in apprenticeship training.”

Rob Gibson MSP, who represents the Caithness, Sutherland and Ross constituency in which Craig Harvey lives and works, said:“I met Craig on the night and it is clear to me that he was a worthy winner. I wish him the best for the future and I am sure he will do well. Caithness has had a long and proud heritage in engineering and construction which continues to this day. It is clear that with people like Craig that heritage is in good hands and I look forward to visiting him at his place of work.”

About the SBATC awards
The SBATC awards began in 1999 as the brainchild of James Birnie MBE, a Past President of Scottish Building who was honoured with the MBE in 1999 in recognition of his work to improve conditions for the construction industry. There were four awards present at the 2013 ceremony:
· The James Birnie Award for Craft Excellence: Apprentice of the Year – Awarded to Scotland’s best traditional craft apprentices undertaking any of the four year SVQ level 3 programmes.

· Civil Engineering Apprentice of the Year – Awarded to Scotland’s best civil engineering apprentice. This might include those working in areas such as general building operations, highways maintenance, groundwork, plant and various technician based qualifications. Winner: Craig Harvey, 21, Wick

About SBATC
Founded in 1934, the main purpose of the SBATC is to regulate the working conditions, wages, recruitment and training of apprenticeships within the building industry throughout Scotland. The Council is composed of equal numbers of employers and operative’s representatives.

Wick Harbour Authority is making progress with its plans to create a heavy-lift facility on the commercial quay at Wick harbour, with contractors Gunns Lybster Ltd having now begun the work.   The project, and its associated dredging works, was supported by CNSRP partners HIE and NDA respectively and is the first of several proposed phases of work to position the harbour as a key player in the energy sector, with the current focus being on potential to benefit from the development of Offshore Wind in the Moray Firth.
[Civil Engineering Contractors]
26/6/2011

AMC Engineering Ltd, whose head office is at Findon just outside Aberdeen, is set to expand their Caithness division by building a new workshop at their site outside Lybster, with the assistance of a grant of Ł76,250 from Highlands and Islands Enterprise (HIE).   Managing Director Andrew Polson, who hails from Caithness and whose parents still live on the family croft at Smerlie next door to the company's workshops, explained that the skill and application of the local work-force was a key factor in deciding to site the new workshop in the north.