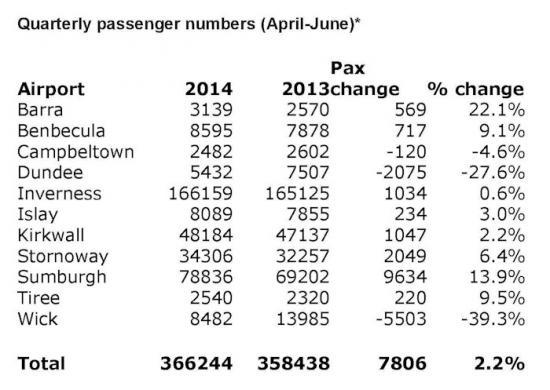 Passenger numbers at HIAL's regional airports grew by almost 8000 during the last quarter, with the group's island airports driving growth.

Latest figures for the last quarter (April - June) show that passenger numbers at HIAL’s 11 airports grew by 7806, an increase of 2.2% on the same quarter last year.

An additional 1034 passengers used Inverness Airport during the period (+0.6%) as demand increased on the Amsterdam, Belfast, Birmingham, Manchester, the Western Isles and Northern Isles routes.

Passenger numbers at Wick John O’Groats fell during the quarter by 39.3% compared to last year, which was an exceptionally busy year as a result of a major but short term helicopter contract. A new contract has recently been agreed and should result in further growth.

At Dundee, a new Public Service Obligation service to London Stansted was launched at the end of March and, as with any new service, the initial uptake has been slow. As a result, passenger numbers at Dundee fell by 27.6%. Passenger numbers were also down slightly at Campbeltown.

Inglis Lyon, Managing Director of HIAL, said: "It is very encouraging to see our smaller island airports driving growth across the group. The increased demand for island services is particularly good news for those local communities and underlines the role our airports play supporting the economic growth of these areas.

"The energy sector continues to drive growth at Sumburgh, where HIAL is investing in improved facilities, and the launch of a tender process to build two new aircraft to serve Barra, Campbeltown and Tiree is further good news for the long term future of air routes for these communities.

“Growth at Inverness was relatively modest during the quarter, but with increased capacity planned on existing Birmingham and Manchester services, both of which are proving increasingly popular as long haul connecting hubs, and new services to London City and Dublin due to begin in October, we are confident that demand at Inverness will grow."