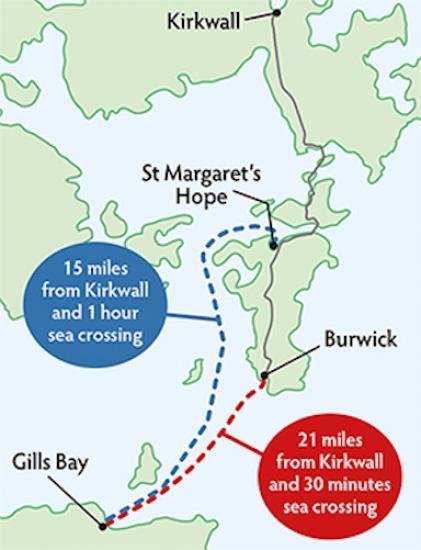 Independent questionnaire conducted for Pentland Ferries Ltd by 'Survey Monkey' about the desirability of a 'real' short-sea-crossing of Pentland Firth Gills Harbour, Caithness to a 'new' RO:RO terminal at Burwick, just eight miles across the water.

Give Your Views In the survey HERE

Folk in Caithness who travel by ferry to Orkney have only a few more days to vote if they would like to see a new route developed from Gills Harbour that would cut the Pentland Firth sea-crossing time to just half-an-hour.

The planned sea-route would be only 8 miles from Gills to Burwick, at the Southern tip of South Ronaldsay. Burwick is 21 miles by the main A 961 road from Kirkwall, the island 'capital'.

In the preamble to the seven questions asked, the company headed by well-known North of Scotland entrepreneur Mr Andrew Banks, OBE states:- 'Pentland Ferries would like to develop a Ro-Ro service from Burwick to Gills Bay. We would invest on a new passenger and vehicle ferry to cover this route. This would allow us to offer more frequent sailings across the Pentland Firth.

It continues :- 'For this to happen, we would require permission from Orkney Islands Council to develop the Pier at Burwick. If the public supports a Burwick-Gills Bay service, we would be prepared to develop the Burwick Pier for this purpose at our own cost'.

The family-owned private company says that is surveying public opinion to see if there is backing for such a service that would enable it to approach the Council.

The 7-point questionnaire is open to all persons who cross the Firth by ferry 'on business or leisure or both' and is not restricted only to islanders, as some Caithnessians seem to have believed.

It asks for a person's initial, surname and address postcode, but it pledges that 'these personal details are collected to ensure that entries are not duplicated'.

It adds : 'This information will be deleted once the survey responses have been analysed', pledging that such 'personal information will not be shared with any other individuals or organisations'.

In 1988.89, the private company Orkney Ferries plc, which ceased trading over two decades ago, partially developed terminals at both Burwick, in Orkney, and Gills in Caithness, using monies raised through a share issue flotation under the then 'Business Expansion Scheme'.

It also included a deposit and early payments on the new-build RO:RO vessel 50 metre 'Varagen', then held on a Bank of Scotland lease.

This latter was 'bought out' by the Council that still uses the ship on Orkney's internal North Isles ferry routes; the Council's present Orkney Ferries subsidiary is unrelated to the earlier similarly-named plc.

Subsequently, after Orkney Ferries plc's funds were spent, Orkney Island Council invested private-sector monies from one of the North Sea Oil funds that it administers on behalf of the people of Orkney, into further works at both Burwick & Gills. The locations on either side of the Pentland Firth were seen as ferry-terminus 'twins'.

Only test-runs were done into Burwick using Varagen in 1989 and no RO:RO service ever operated there; but the facility has been used more-or-less since then during each year's summer months as a berth for the passenger-only seasonal service operated by John O'Groats Ferries with its Pentland Venture.

An Orkney Ferries plc freight-only service ran for a short period in 1989 from Gills to Houton, on the North side of Scapa Flow.

It ended after the company's intentionally-floating 'link-span' at Gills became dislodged; there was no hydraulic system to raise it out of the water when it was not in use, making ot vulnerable to swells and exacerbated as there was then no breakwater at Gills Harbour.

The plc's partial lease at Gills was firstly assigned to a trading arm of Orkney Islands Council and then in turn to Pentland Ferries Ltd. in the late 1990s.

Gills Harbour Ltd, the Canisbay community company that owns Gills facilities has strongly supported the revival of the ancient trans-Pentland 'short sea route' to Burwick, so long as the interests of the John O'Groats company are 'protected'.

Said chairman Bill Mowat, a former NE Caithness Councillor: 'From what we know, there is a clear majority of people who prefer any crossing to involve as short a sea- passage as possible. This is certainly the case if some of the sea-miles can be substituted by a main-road journey on dry land. And that is certainly true for any trip across the Pentland Firth'.

'Pentland Ferries has been true to its word in delivering a modern ferry terminal on sea and land here at Gills Harbour at no cost at all to the public purse.

'We are confident that Mr Banks's company can make 'a good fist of things' if it secures access to Burwick, and we want to look forward to a second new ship operating from Gills Harbour and providing a 'shuttle services' to Orkney at least during summer months.

'One important reason for our backing is that the planned new service will bring Orkney's Mainland within reasonable 'day travel-to-work distance' for Caithness folk ... and vice-versa ... as was predicted in the 1993 'Gills Harbour Report' commissioned by our predecessor Gills Harbour Association and which envisaged an upgraded RO:RO facility being completed at Burwick.'

Give Your Views In the survey HERE