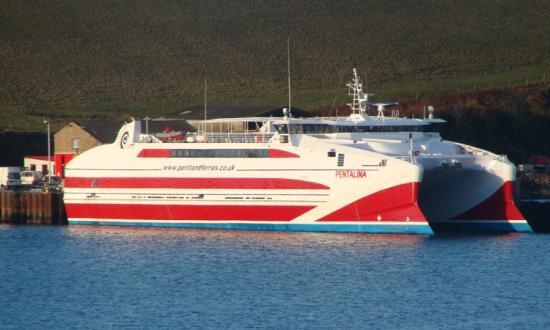 OFFICIAL FIGURES SHOW MORE PEOPLE AND CARS SAILED ACROSS THE PENTLAND FIRTH FROM CAITHNESS TO ORKNEY IN 2016 FROM GILLS BAY THAN ON ANY OTHER ROUTE.

Official figures recently published by Scottish Government 'spending watchdog' body Audit Scotland show that the so-called 'short sea-route' from Gills Bay to St Margaret's Hope was the busiest seaway to Orkney across the Pentland Firth in 2016.

These also show that Serco NorthLink Ferries Ltd still carried the largest number of passengers and vehicles to and from Orkney, when the total of 34,000 users from Aberdeen to Kirkwall (Hatston) is added to the those passengers using its service from Scrabster to Stromness.

The report was tabled at the recent regular board meeting of Gills Harbour Ltd. It prompted a short discussion after it was noted that the figures were contained in an appendix.

Serco NorthLink receives a public-money subsidy of £40.5 million per annum for the Northern Islands contract, including its key Shetland runs, that it won from the Scottish Government's Transport Scotland in 2012 for a six-year term. This deal is expected to be continued for a further year.

Pentland Ferries Ltd does not receive any taxpayers monies, although both companies will benefit when a form of Road Equivalent Tariff commences in 2018.

The latter possesses its own vessels, whilst it has used company profits to re-invest in building a modern terminal at Gills, including a c. 200 metres long breakwater based on two internally and externally-strengthened redundant floating dry-docks, emplaced on a dredged-level seabed.

Pentland Ferries Ltd leases some land and foreshore from community-owned Gills Harbour Ltd, whilst it rents adjoining seabed from the Crown Estate.

The vessels that Serco NorthLink operates are leased from a subsidiary of the Royal Bank of Scotland plc.

The Scottish Ferries Report, by the spending watchdog, was principally into services operated through Transport Scotland and subsidised by UK taxpayers. But it also published figures, presumably for comparative purposes, from some wholly private operators, such as Pentland Ferries Ltd, the family firm from St. Margaret's Hope, Orkney that operates the thrice-daily year-round links from Gills Bay.

When it was first published last month, attention was focussed mainly on the fact that, over the past decade, public-money spending on Transport Scotland's 32 subsidised ferry routes has more than doubled in real-terms.

There has been an increase of 115% since 2007/8, whilst passengers on these routes has gone up by only 0.3%, but cars carried has risen by 16.8%. A total of over 5.7 million passengers were carried on those subsidised services in 2016, the vast majority on state-owned Caledonian McBrayne's runs on the busy Firth of Clyde and to the Inner & Outer Hebrides. The extra cars is attributed to the introduction of Road Equivalent Tariff (RET) on those Western routes.

Audit Scotland's published figures showed that 139,900 passengers crossed from Gills Bay in 2016, slightly more that the 139,000 that sailed on the route from Scrabster to Orkney then.

The figures for cars showed a much more substantial lead in Gills Bay's favour with 53,100 being carried on the so-called short-sea route as against 38,700 on the Scrabster to Stromness run. No commercial vehicle figures for trucks were provided, but it is known that Gills is the busiest route.

Trans-Pentland freight is not subsidised, but Serco NorthLink gets taxpayers' money for freight carriage on its Aberdeen-based routes to Orkney & Shetland.

It is thought that 2016 was the first year in which more ferry passengers to/from Orkney used Gills Bay rather than Scrabster.

But the numbers crossing the Pentland Firth's

narrowest eastern end may have been greater than Scrabster's total for about a decade.

That is when the (unpublished) totals on the busy passenger-only summer service operated mainly for tourists by John O'Groats Ferries with its 250-capacity vessel Pentland Venture are added to the numbers sailing from Gills.