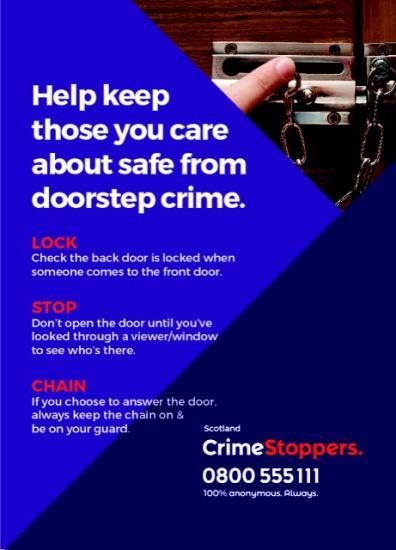 Help halt the harm doorstep criminals cause in your community.

Independent charity Crimestoppers is today launching a campaign to raise awareness of Doorstep Crime and encourage people to pass on any relevant information 100% anonymously.

There are two main types:

Bogus callers try to get into your home or obtain personal details by pretending to be someone they're not. This includes council staff, charity collectors, meter readers and police officers. In reality, they are criminals trying to steal money and valuables.

Rogue traders usually cold-call, claiming to be workers offering to sell services, make repairs or carry out work on your house, garden or driveway. In reality, they charge inflated prices for shoddy or unnecessary work.

Angela Parker, National Manager for Scotland, said:"Our charity believes everyone has the right to feel safe wherever they live, especially in their own home.

"Doorstep criminals often target older people living alone and recently a 75 year-old Glasgow man was conned out of handing over £3,500 to bogus workmen for unfinished and unnecessary roof repairs.

"Whilst many legitimate companies use doorstep selling, sadly fraudsters also use this technique. The emotional and financial upset this causes often devastates the victim, so we are encouraging people to speak up and stay safe. Everyone has a part to play, so: lock, stop, chain and check and above all, if in doubt, keep them out."

“Doorstep crime affects people in their own home, a place where they should be safe from crime and harm.

“The scammers, bogus callers and rogue traders target some of the most vulnerable in our society and don't care about the distress or impact it has on their victims and the wider community.

Shut Out Scammers aims to raise awareness of door step crime and I encourage everyone to look out for our families, friends and neighbours. Crimestoppers offer a safe and anonymous way to provide information about crime people know of or suspect. I urge anyone with information about who is committing doorstep crime to report it."

The Scotland-wide campaign involves a targeted social media campaign, posters and postcards aimed at every householder.

“If you have information about their activities, please let us know. We never take personal details and you will remain 100% anonymous. Always. Call 0800 555 111 or use our anonymous online form at Crimestoppers-uk.org. Once you end the call or click send online, you’re done. With Crimestoppers, our charity guarantees that no one will ever know you contacted us. Speak up and help protect your community.”

If you have any information, please contact Crimestoppers charity 100% anonymously on 0800 555 111 or through the non-traceable Anonymous Online Form at www.crimestoppers-uk.org.

A multi-agency operation aimed at removing abandoned and untaxed vehicles from the roads of Caithness has led to 27 vehicles being clamped or seized.   Police Scotland officers have worked with the Driver and Vehicle Licensing Agency (DVLA) and Highland Council Environmental Health officers during the three day operation running from Monday, April 15 until Wednesday, 17 April 2019.
[Other Public Services]
7/3/2019

The cost of Police Scotland's junked phone hacking kiosks is likely to rise again as the force considers taking legal action to prove it did not breach privacy laws.   It spent £370,684 last April on 41 of its cyber kiosks, which let officers copy data from mobile phones, but the plans were shelved following an outcry from privacy campaigners, The Times reports.
[Other Public Services]
24/2/2019

Police Scotland can confirm that two men have been charged in relation to two vehicles detected travelling at 131mph on the A9.   The two vehicles were seen by road policing officers near Arpafeelie on the Black Isle north of Inverness shortly after 11.15pm on Wednesday, February 20.