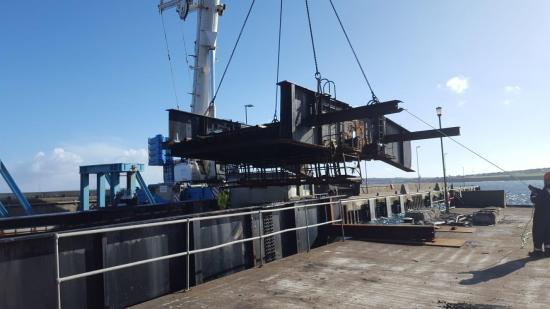 Leask Marine have recently completed the decommissioning of the redundant 160 tonne Ola Pier linkspan as part of the redevelopment at Scrabster Harbour, Caithness.

The project included the preparation works of dismantling of the linkspan ramp from the existing pier, placing in temporary support beams to the linkspan prior to the cutting works, removal of the tar from the linkspan road surface, cutting and dismantling the support towers and cutting the actual linkspan into firstly pieces. This could be lifted using a 350 tonne crane and then once on the pier cut into transportable pieces. These sections were lifted onto lorries for onward transportation for 100% environmental scrappage. The tar which was removed was also recycled.

Earlier this month the NDA announced

The head office of Leask Marine is located in Kirkwall, Orkney.

The second phase in a major upgrade of Scrabster Harbour in Caithness has secured up to £3m investment from Highlands and Islands Enterprise (HIE).   The funding will enable the redevelopment of the existing St.
[Other Public Services]
16/1/2019

A new multi-million pound redevelopment at mainland Scotland's most northerly port, Scrabster Harbour, is already reaping the benefits, only two months after coming into operation.  Scotrenewables Tidal Power Ltd, based in Orkney, has chosen Scrabster as the location for their most recent operations and maintenance work on their prototype tidal turbine, the SR250.