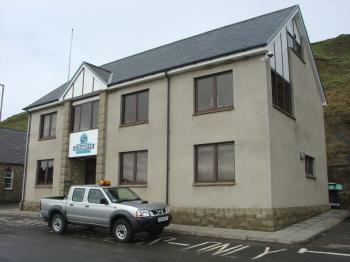 Scrabster Harbour Trust operates a multi-purpose port on the North coast of Scotland. Scrabster is a key hub of economic activity in the region, catering for a wide variety of sectors such as oil and gas, renewables, fishing and cruise ships. The harbour offers extensive facilities, with 24/7, 365 days a year access to the port. Scrabster Harbour possesses a strong local supply chain and is one of the UK’s top whitefish and shellfish landing ports.

Modernising Trust Ports – A Guide to Good Governance describes a trust port as ‘a valuable asset presently safeguarded by the existing board, whose duty it is to hand it on, in the same or better condition to succeeding generations. This remains the ultimate responsibility of the board, and future generations remain the ultimate stakeholder.’ Through the running and maintenance of this asset, though, others stand to benefit.

Leask Marine have recently completed the decommissioning of the redundant 160 tonne Ola Pier linkspan as part of the redevelopment at Scrabster Harbour, Caithness.   The project included the preparation works of dismantling of the linkspan ramp from the existing pier, placing in temporary support beams to the linkspan prior to the cutting works, removal of the tar from the linkspan road surface, cutting and dismantling the support towers and cutting the actual linkspan into firstly pieces.
[Other Public Services]
16/1/2019

Scrabster Harbour Trust (UK) has taken delivery of a new harbor tug / workboat, a Damen Stan Tug 1606.  The vessel, named Highlanders, will replace its current workboat which was built in 1976.