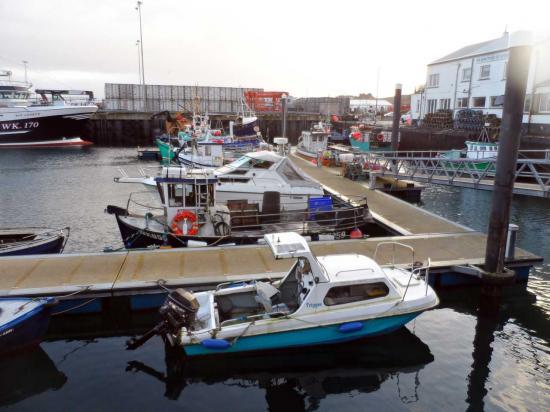 See Photo Gallery to take look around Scrabster harbour as 2019 draws to a close.

Up to £2 million of potential new opportunities to help fleet.   Inshore fishers who usually target shellfish will now be able to diversify into new markets and access fishing opportunities worth up to £2 million.
[Advisory / Counseling Services]
1/8/2019

Leask Marine have recently completed the decommissioning of the redundant 160 tonne Ola Pier linkspan as part of the redevelopment at Scrabster Harbour, Caithness.   The project included the preparation works of dismantling of the linkspan ramp from the existing pier, placing in temporary support beams to the linkspan prior to the cutting works, removal of the tar from the linkspan road surface, cutting and dismantling the support towers and cutting the actual linkspan into firstly pieces.
[Other Public Services]
16/1/2019

A new multi-million pound redevelopment at mainland Scotland's most northerly port, Scrabster Harbour, is already reaping the benefits, only two months after coming into operation.  Scotrenewables Tidal Power Ltd, based in Orkney, has chosen Scrabster as the location for their most recent operations and maintenance work on their prototype tidal turbine, the SR250.
[]
6/7/2013