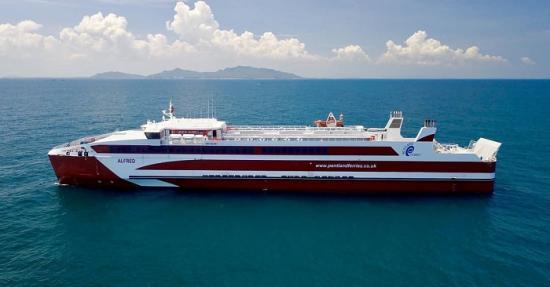 The boat went round to Kirkwall immediately at the end of 9,000+ miles voyage from the Strategic Marine yard near Ho Chi Minh city (ex. Saigon).

Ar Gills Harbour everyone is delighted to see the safe delivery of this vessel that has 30% more capacity than Pentalina and should end would-be customers being told 'fully-booked, no passage available' and thus cater for all passengers wanting to cross the Firth to Orkney.

At St Margarets Hope the children from the local school all went down to the pier to see it arrive.

With tourism on the North Coast 500 booming and many visitors saying they will be back to spend more time in the north taking ferries to Orkney this is a great addition.

Pentland Ferries' new £14-million vessel, mv Alfred is almost ready to make its first trip from St Margaret's Hope to Gills Bay on Friday, 1st November 2019.   The new ferry arrived on 9th October 2019 after completing its journey from the shipbuilders in Vietnam for the final fittings to be carried at Kirkwall after quick call at St Margarets Hope where local children had a chance to get a glimpse of it.
[Air / Bus / Rail / Ferry Services]
31/8/2019

Pentland Ferries has announced that the company's new ship, Alfred, left the yard in Vietnam, yesterday morning, Thursday, to start the long voyage home to Orkney.   Director of Pentland Ferries, Kathryn Scollie, said: "We are delighted that the MV Alfred is now on her way.