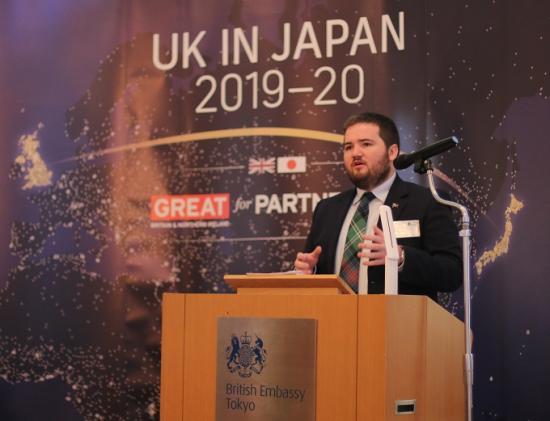 As part of the nuclear sector deal, to foster ever-stronger links between the British and Japanese nuclear industry, Councillor Struan Mackie who represents Thurso and North West Caithness on Highland Council (Deputy-Chair of the Dounreay Stakeholder Group) undertook a five day Japanese visit to discuss the impact of nuclear decommissioning on local communities with stakeholders in Tsuruga City, Fukui prefecture.

The whistle-stop visit included two days in Tsuruga on , the home of the Japanese Atomic Energy Agencies fast reactor ‘Monju', is generally regarded to be a ‘partner plant' to Dounreay's PFR in Caithness. The trip, supported by the British Embassy, also included a formal meeting with Tsuruga City's Mayor Takanoby Fuchikami and the delivery of a speech on the Caithness and North Sutherland Community at the British Embassy.

On return to the United Kingdom, Cllr Mackie stated "the expertise developed by the Caithness and North Sutherland workforce is well known and highly valued by the Japanese. After delivering my speech at the Decommissioning Reception in Tokyo, I was amazed at how knowledgeable the delegates were of the Dounreay site and the decommissioning progress being made by the workforce.

"The UK and the Nuclear Decommissioning Authority are viewed as world-leaders within nuclear decommissioning for good reason, the work at Dounreay is around a decade more advanced than the Monju site, which only entered decommissioning in December 2016. This progress has generated valuable knowledge and experience, with UK companies (Cavendish Nuclear, Wood Plc and Dounreay Site Restoration Ltd) recently winning a contract to support the decommissioning efforts at Monju. We should be immensely proud of that, it is a good news story for UK Plc as well as the Far North of Scotland."

Speaking about the trip and the Tsuruga community, Councillor Mackie noted "The area around Monju definitely reminds me of the Scottish Highlands. The coastal port community is far from the large population centres, having a predominantly rural economy but a very strong nuclear presence. There are four nuclear sites and a research centre on the peninsula alone, two of which have recently entered decommissioning.

"Ultimately, the decision to close these sites is still very fresh in local people's minds and that is why they are looking at Caithness and North Sutherland as a blueprint for engaging to the community and looking to opportunities out with the nuclear industry. That is why I was delighted to have such an in-depth conversation with Takanoby Fuchikami the Mayor of Tsuruga, and I am very hopeful that he will take up my offer to visit us in Highland and see the work first hand. There are great opportunities to build links between our nuclear communities, not only by sharing our experiences with nuclear decommissioning but by also engaging our schools and colleges, I think it would be a very exciting link-up."

Struan Mackie represents the Thurso and Northwest Caithness ward in the Highland Council, home to the Dounreay and Vulcan nuclear establishments.

Cllr Mackie is the Deputy Chairman of the Dounreay Stakeholder Group, the statutory scrutiny body supported by the Nuclear Decommissioning Authority for the two sites.

Under the Nuclear Sector Deal, the NDA is working alongside Department for International Trade (DIT) on promoting the UK's nuclear expertise to maximise future export orders across the nuclear lifecycle. The recently secured contract with the Japanese Atomic Energy Authority will see ‘Team UK’, comprising experts from Cavendish Nuclear, Wood plc and Dounreay Site Restoration Ltd use the expertise developed through decommissioning Dounreay’s PFR reactor to support decommissioning of the Monju site in Tsuruga, Fukui prefecture.

It is hoped that in addition to the economic opportunities for British companies currently operating at the Dounreay site, there can also be social and cultural benefits for Tsuruga and Caithness and North Sutherland, with ongoing discussions with the local authorities from both communities having taken place during a trip organised by the British Embassy / DIT earlier this month.

In addition to his council work Cllr Mackie is employed at -

North Highland College UHI - Secretary to the Board of Management

Information about how to work with Dounreay as a supplier was updated on 15th February 2022.   Businesses can check it all out HERE .
[Advisory / Counseling Services]
11/2/2022

Over 700 apprentices who are currently training within NDA group businesses across the UK.   Our apprentices are contributing to one of the most important environmental clean-up programmes in the world, and during the week we'll be sharing their stories.
[Other Public Services]
11/2/2022

Lifting The Lid On The Dismantling Of Dounreay's Material Test Reactor