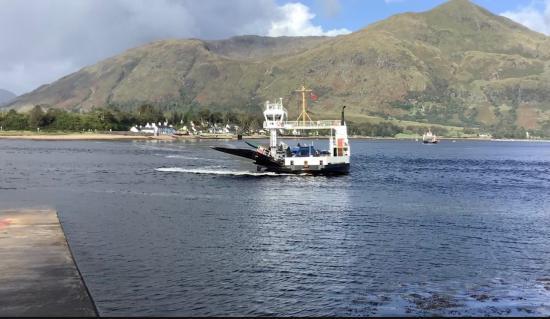 Highland Council is currently looking at options to secure the future of the lifeline ferry service at Corran Ferry, Lochaber.

The local authority is responsible for operating the Corran Ferry service, which is the busiest single vessel route in Scotland. It carries over 260,000 cars each year and delivers over 30,000 sailings, early morning to late at night, 365 days of the year.

The ferry vessels are at the end of their life and are in need of replacement. Large capital spending will be required to future proof the sustainability and viability of the service.

At a meeting this week of the Corran ferry Steering Group, community representatives were advised that as part of an ongoing outline business case, Highland Council has reviewed again the vessel/infrastructure options to fully understand what will generate the largest benefits whilst considering each of the options in terms of their affordability.

As a result of this, recommendations will be put forward for the Council to consider the option of two new smaller hybrid Roll-on/roll-off vessels (2 x 25 car) which will enable faster loading and will result in the service being compliant and running to the published timetable (instead of shuttling).

The alternative option was for one new larger (50 car) Roll-on/roll-off vessel, with refit / relief / second vessel secured from elsewhere (CMAL fleet). It was agreed that a one vessel operation would result in short-term service outages (No Service) in the event of a breakdown while a backup vessel was mobilised.

Councillor Andrew Baxter, who chairs the Steering group, said from a "political, economic and social point of view, this would be unacceptable".

Two smaller vessels will deliver guaranteed vessel availability all year round and will provide the required reliability, resilience and sustainability for a lifeline socio-economic dependent service over a 30-year period and should therefore be the preferred option.

The upfront capital costs of the new hybrid vessels will be balanced by savings in operating costs, with improvements in efficiency and fuel consumption that will also contribute to reduced carbon emissions.

An anticipated increase in revenue due the larger capacity of the new vessels and increasing passenger numbers will also help off-set the initial cost. The preferred option will now be considered by the Council's Harbours Management Board later this month.

The Steering Group also supported the commissioning of an up-dated socio-economic study to be undertaken to reflect the benefits that the Corran Ferry brings to Ardnamurchan, Morvern, Lochaber, Mull and tourism across the West Highlands.

The next step in the outline business case will be to undertake cost modelling on the operational costs and income opportunities. Highland Council does not have a committed capital programme for replacement vessels/slipways and will look to explore sources of funding for the required capital spending. (£45m)

The findings of the 2-vessel option will be taken back to the Councils Economy and Infrastructure Committee seeking approval early next year.

Fiona Duncan has been appointed by The Highland Council as Executive Chief Officer for Health and Social Care, taking over from Fiona Malcolm who has been undertaking the Interim ECO role since early September.  Ms Duncan is due to take up the position in January 2021.
[Local Authority]
29/10/2020

At today's meeting of The Highland Council members gave their backing to a motion that highlights the need for the UK Government to review the sick pay system and reform it as a matter of urgency.   Councillor Alasdair Christie, Chair of the Council's Recovery Board who put forward the motion along with Councillor Alex Graham said: "It has become more obvious than ever during the current Covid 19 crisis that there are clear and substantial long-standing inadequacies in the sick pay system.
[Local Authority]
27/10/2020

REGIONAL Labour MSP Rhoda Grant has welcomed a commitment from Highland Council to return all schools to a hot meal service.   In a letter to the MSP this week, the local authority confirmed more than 60 per cent of schools have gone back to serving hot meals already and it said all schools are expected to follow suit "shortly".
[Local Authority]
26/10/2020

The Leader and the Chief Executive of The Highland Council earlier today took part in a meeting of COSLA focussing on the Scottish Government's new five level protection system for Covid.   The meeting gave council leaders the opportunity to examine in more detail the mechanism outlined by the Scottish Government along with the framework of how the tier system will be implemented.
[Local Authority]
26/10/2020

Following its launch on Tuesday 20th October 2020, Highland Council has received and paid out the first Business Hardship Fund grants.   As part of the Scottish Government's response to the COVID-19 Brake Restrictions which came into effect on 9 October, the Council has been asked to deliver this grant scheme on behalf of the Scottish Government.
[Local Authority]
26/10/2020

Highland Council Trading Standards are keen to raise awareness of the role of The Small Business Financial Ombudsman Service in resolving disputes between small and medium sized businesses (SME's) and financial service providers which include banks, insurance and money lending businesses.   David MacKenzie, Highland Council Trading Standards Manager explains: "We realise the financial struggle that some SME's have had recently because of Covid 19 restrictions.
[Local Authority]
23/10/2020

At the Caithness Area Committee on 22 October 2020 members unanimously confirmed their full support to the business case for Wick John O'Groats Airport to receive Public Service Obligation (PSO) status by putting forward a motion and reinforcing their commitment to working with stakeholders and partners to deliver this as a matter of urgency.   The motion lodged recognises the fundamental strategic importance of Wick John O’Groats Airport to the economy of the region, and the energy, business and tourism sectors in particular.
[Local Authority]
22/10/2020

Councillors approve over £2 million of investment in Caithness council housing

Members of the Caithness Committee have identified fuel poverty as their number one concern and are pleased to announce that the member-led capital housing budget has increased to 10% as they welcome £2,253,000 of investment which will be used to carry out improvements to the housing stock across the county.   A specific priority of the capital programme is improving heating and make homes more energy efficient, with over £1,300,000 of budget approved to replace the oldest and most inefficient heating systems with a further £150,000 for one-off heating replacements.
[Local Authority]
21/10/2020