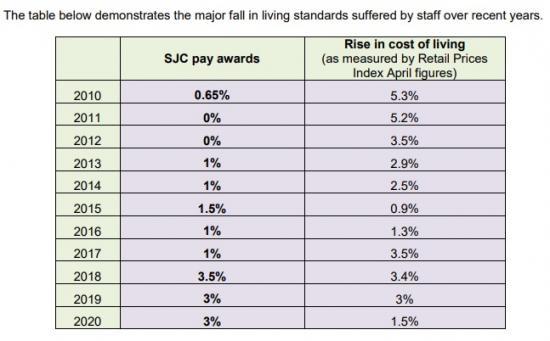 Local government unions have today issued notices of industrial action to local authorities across Scotland in a dispute over pay for council workers.

The Joint Trade Unions have between them mandates to take action in half of Scotland's local authority areas. Today (Monday 25 October 2021) they have notified COSLA that they have served notices to those authorities that they will be calling out members employer in school cleaning, school catering, school janitorial, waste, recycling and fleet maintenance services on the 8th, 9th, 10th, 11th and 12th November.

It is understood that this could be the start of an escalating period of action if the employer does not change their position.

The Joint Trade Unions have also written to the Cabinet Secretary for Finance, Local Government and Education calling on them to intervene saying that it is not credible for the Scottish Government to wash their hands of local government workers by arguing technicalities of the bargaining machinery.

It is now more than 10 months since the Joint Trade Unions submitted their pay claim, on behalf of the 200k local government workers covered by the Scottish Joint Council negotiating machinery, and 19 months into a global pandemic which has seen them working flat out on the frontline with no reward.

Johanna Baxter, UNISON Scotland head of local government said: "It is the combined failure of both COSLA and the Scottish government to reward these key workers that has led to the situation where we have now been forced to issue notice of targeted strike action.

"Our members are at breaking point and are worth more than what is on offer - it is deeply regrettable that they should have to withdraw their labour for the employer to recognise their worth. Over 55% of LG workers earn below £25k per year, and the vast majority have received no reward at all for their efforts during the Covid pandemic. The current offer does not even bring the lowest paid LG workers up to £10 per hour."

Wendy Dunsmore, Unite industrial officer, said: "Unite's members across eleven local authorities will be taking targeted strike action due to the abject failure by COSLA and the Scottish Government to pay workers a fair and decent wage. The incredible professionalism and sacrifice by local government workers has not been recognised during the Covid-19 pandemic, and Unite's members will no longer tolerate being treated as the poor relation in our public services.

"School cleaners, caterers and janitors alongside fleet maintenance, waste and refuse workers are saying enough is enough. Let's be clear that this situation has arisen because COSLA and the Scottish Government are forcing local government workers into taking industrial action due to their derisory pay offer. Both have a duty to get back round the negotiating table with a new offer or industrial unrest is imminent."

Drew Duffy, GMB Senior Organiser said: "Scottish Politicians have failed to value Local Government workers throughout this pandemic and so many of these worker are low paid key workers. Today, thousands of these low paid workers will be telling their employer that they will be going on strike across Schools and Waste to fight for a decent pay rise. Scottish Council leaders and Scottish ministers have let these workers down by failing to value the work they do so these workers will now be forced to close schools and leave household waste uncollected to force these leaders to pay then what they deserve. It's been over 18 months since any of these key workers had a pay rise and that is a disgrace given the work they have done over the last 18 months."
-------------------------------------------------------
SJC Pay Claim 2021
The pay claim outlined below is submitted by the SJC Trade Union Side for Local Government workers covered by SJC conditions for the period 1 April 2021 to 31st March 2022. Our claim is for:
 A settlement that runs for the period 1 April 2021 to 31 March 2022
 A £2,000 flat rate increase to all spinal column points, or 6%, whichever is greater (based on a 37 hour working week).
 An underpinning minimum rate of pay of £10.50 per hour.
 A separate, additional payment towards pay restoration.
 An equivalent percentage or, the median paid where the base salary increase is paid as a flat rate, uprating of all allowances.
 No less than parity with other Local Government bargaining groups.
 All professional costs associated with the role to be met by the employer.
 A commitment to exploring ways in which to achieve a no-detriment reduction in the working week.
 An assessment of the pay gap against all protected characteristics.

The Trade Unions welcome the Scottish Government‟s stated intention not to follow Westminsters lead and apply a public sector pay freeze beyond the NHS. Whilst welcoming the commitment to ensuring that the Scottish public sector pay policy provides for a pay increase we know that the Scottish Government have in the past argued that the public sector pay policy should not apply to Local Government workers. We call on COSLA and the Scottish Government to ensure that the commitment to providing for a pay increase extends to SJC conditioned workers.
The claim is set at a level that we believe recognises the following key points:
 Substantial increases in the cost of living over recent years have significantly reduced the value of staff wages;
 Appropriate reward is needed to sustain the morale of staff in their crucial role of delivering high quality services;
 Appropriate reward is needed for the increased workload and stress placed on staff against a background of unprecedented changes in working practices.

Restoration
Despite the introduction of, and the employers commitment to, the Scottish Local Government Living Wage our members have not been immune to the squeeze in living standards brought about
by years of austerity and below inflation pay increases.

The table below demonstrates the major fall in living standards suffered by staff over recent years.

For the value of staff wages not to fall back even further, they must at least keep pace with predicted rises in the cost of living, which Treasury forecasts put at 2.3% in 2021.

The Trade Unions‟ are clear that this years pay settlement must not only protect workers from falling back further but should start to reverse the many years of real terms cuts to wages through pay
restoration.

This pay claim is therefore designed to protect the lowest paid workers but also start to bring workers earnings back into line with where they should be. We appreciate this cannot be done in
one year but would remind you that this principal was accepted as part of our previous pay agreement.

Members of Scotland's largest local government union have voted to accept a pay deal after the union secured an additional £48m funding on the paybill for an improved offer from COSLA.   UNISON announced the result of its ballot today (Monday 29 November 2021) with more than 75% voting in favour of the offer.
[Local Authority]
29/11/2021

The Leader of The Highland Council, Cllr Margaret Davidson, recently met with Council Roads Staff in Wick on a visit to Caithness.   Cllr Davidson said: "We have had a good discussion with the Area Roads Manager and some of her Team and I am very impressed with the road works that they have achieved this season.
[Local Authority]
22/11/2021

On behalf of The Highland Council, High Life Highland this week announced Airborne Lens as the successful partner for the photography input to Spirit:Journeys, part of the Spirit of the Highlands project.   Spirit:Journeys will be delivered in partnership with VisitScotland and aims to deliver benefits for local communities, helping to unlock economic potential and improve visitor experiences across the region by engaging people with the our rich natural and cultural heritage.
[Local Authority]
22/11/2021

Contractor To Start On Upgrade Works At Uig Harbour

RJ McLeod (Contractors) Ltd are starting works at Uig Harbour this week where the ferry terminal will be upgraded with new infrastructure.   This forms a key part of the Skye Triangle upgrade where The Highland Council have been working closely with Transport Scotland, Caledonian Maritime Assets Ltd (CMAL), CalMac Ferries Ltd and Comhairle nan Eilean Siar to deliver the Uig works with the ongoing upgrade works at Tarbert and Lochmaddy.
[Local Authority]
22/11/2021

For many people, literacy is taken for granted - but for some across Highland, reading can be a struggle.   High Life Highland is highlighting that help is available, during this year's Book Week Scotland, for those who want to improve their literacy skills.
[Local Authority]
18/11/2021 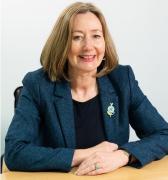 Carron McDiarmid, Executive Chief Officer Communities and Place is retiring from The Highland Council after 35 years of public service and 20 years as a senior officer in the Council.   Carron was previously the Council's Head of Policy for many years and led the first phase of Council Redesign.
[Local Authority]
11/11/2021

The Highland Council is inviting communities to apply for a share of a new fund to support nature restoration projects.   The Nature Restoration Fund (NRF) is a new capital fund, established by the Scottish Government, designed to help support projects that will deliver nature restoration, safeguard wildlife, and tackle the causes of biodiversity loss due to climate change.