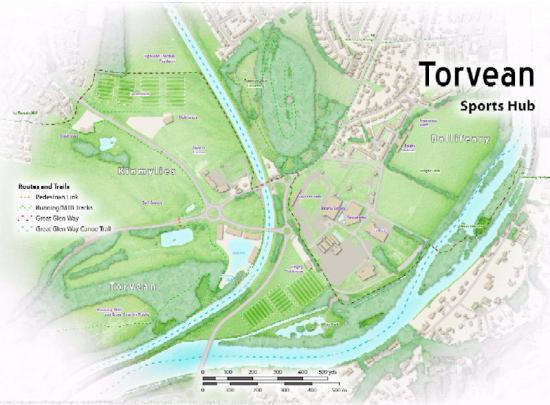 Exciting plans for the future development of the Torvean/Ness-side areas of Inverness, together with the timetable for proceeding with the Ż27.2 million Inverness West Link Road were revealed today (Friday 5th April 2013) by senior members of The Highland Council.

Council Leader Drew Hendry was joined by Depute Leader David Alston, Convener Jimmy Gray, and Leader of the City of Inverness Area Committee Ian Brown and Planning and Development Chairman Thomas Prag in highlighting the huge potential to make Inverness a better connected city, provide much-needed affordable housing and create a recreational/sporting hub in the west of the city, the equal of any in Scotland.

The ōgolden opportunityö to boost the cityÆs economy and wellbeing, they say, is being made possible by the construction of the Inverness West Link Road, which will provide a new transport link from the Southern Distributor Road at Dores Road to the A82 trunk road at General Booth Road via a fixed link across the River Ness and the Caledonian Canal.

The progress on the West Link as well as the Draft Development Brief for the area will be considered by The Highland CouncilÆs City of Inverness Area Committee on Monday 15 April.

On Tuesday 16 April, a 7-week period of public consultation begins on both the West Link Road Scheme and the Draft Development Brief for Torvean/Ness-side.

On Wednesday 17 April, both sets of plans will be on show at a public exhibition/drop-in session at Kinmylies Church (10am till 8pm).

On Thursday 18 April, the plans will be available at Culduthel Christian Centre (10am till 8pm).

The deadline for comments is Friday 31 May.

It is planned that the final road scheme will be taken to the City of Inverness Area Committee on Monday 12 August for approval to enable submission of the planning application and road traffic orders by late August.

Councillor Hendry said the preferred road line was unanimously chosen by the Council at its meeting on 1 March 2012, following two major public consultations and rigorous technical, financial and environmental assessments of more than 90 options.

The route follows a sweeping alignment along the river bank from Dores Road Roundabout to cross the River Ness at the Precast Yard/Weir. Thereafter the link road will follow the toe of the Caledonian Canal embankment to a tandem canal bridge arrangement at Tomnahurich.

Councillor Hendry said: ōOn all counts, the route we have chosen is the best one ¢ one which we are totally committed to proceeding with. We must maintain the significant progress we are achieving so that work can start in 2015.

ōThe West Link will remove traffic from the city centre and make it a much more attractive place for shoppers and tourists. By providing an additional bridge over the River Ness people will no longer have to go through the city centre to cross the river.

ōIt will complete the Southern Distributor Road and allow traffic to circulate efficiently, and provide a direct link to key locations such as, the sporting facilities at the Bught, Raigmore Hospital, Lifescan, and the new UHI Campus. The West Link will support cycling and walking and encourage people to get out of their cars. There will be improved access for cycling and walking to other parts of the city, as well as improved access to leisure along the River and Canal, where there are hugely exciting opportunities for tourist-related attractions.ö

Councillor Gray is excited by the improved accessibility that the West Link will provide and the opportunity to create a range of sporting facilities at Torvean to equal any in Scotland. He said: ōThis is the best chance in 50 years for the Council to establish something really special in terms of recreational and sports provision. The road is the catalyst for a great many exciting opportunities.ö

Councillor Alston said the investment in the road and recreational facilities will Improve the general profile of inverness ¢ helping it establish its position as a modern, vibrant city with new attractions and facilities. The capital budget allocation for the road would inject an estimated Ż10 million into the local economy and help the construction industry.

He said: ōThis will ultimately attract further inward investment in the Highlands. It will also improve the quality of attractions for the city as a whole.ö

Councillor Brown said: ōThis is a golden opportunity to maximise the potential that the new road and development brief present to the people of Inverness. The investment the Council has committed to Inverness demonstrates the huge importance of the city to the economy and wellbeing of the Highlands.ö

Councillor Prag said the Draft Development Brief would excite Inverness residents because of the scope for creating a recreational hub and a major boating/yachting destination and at the same time safeguarding some of the cityÆs most valuable assets, e.g. Whin Park, Canal Pitches etc from development.

He said: ōThe areas around the West Link have been allocated for development for a number of years. No significant development has been permitted in advance of this Development Brief being prepared. A Charrette was held in September 2012 which captured community views on the development potential for this area. The Development Brief content is broadly in line with these outcomes.

ōThe Brief sets out the development potential at Ness-side, which has capacity to deliver in the order of 750-800 houses, commercial and business opportunities and new open space, including a football pitch and riverside park area.

The highlights of the Draft Development Brief are: -

Ģ Delivery of between approx. 1,300 and 1,550 homes in total
Ģ Delivery of between approx. 325 and 390 affordable homes
Ģ It will mean completion of the Ness-side District Centre - including shops and other facilities.
Ģ Creation of elderly/care accommodation/village at Milton of Ness-side
Ģ Creation of new business spaces and employment opportunities, e.g. Ness-side district centre, marina, sports facilities.

Ģ Capital budget allocation for the road will inject Ż10mÆs into the local economy and help the construction industry
Ģ Improves the general profile of inverness ¢ helps it become a modern, vibrant city with new attractions and facilities. This will ultimately attract further inward investment in the Highlands.
Ģ Improve the tourist offer and quality of attractions for the city as a whole ¢recreational facilities, tourist attractions, improved transport network including cycle ways and footpaths.
Ģ Help to develop the city as a major boating/yachting destination
Ģ Provides a link from west of the city to employment centres to the east ¢ Campus, Raigmore, LIfescan

Ģ Delivery of 5 new sports pitches and safeguarding 3 of the 4 pitches at the canal
Ģ Reconfiguration of the golf course to make for better playing experience and major draw to the city for visitors.
Ģ Retain green fingers of greenspace throughout any new developments ¢ corridors for not just people but wildlife to flow through.
Ģ Improved access to the riverside greenspace on both sides of the river. Creation of a linear park running alongside the river at Ness-side which will provide an excellent addition to the already existing footpath network in the area.
Ģ Proposals in the brief would create a genuine green gateway into the city for people travelling from the South West ¢ which includes many tourists to the city.
Ģ New informal greenspace at holes 5-8 may be opened up if the golf course can be relocated to the other side of A82. This would benefit from being an already established natural hub, e.g. mature trees, pond etc.

Ģ The development of a major sports hub, not just for that people in that part of inverness but for the city as a whole and the wider Highland area to enjoy.
Ģ Improvement of facilities for existing sports clubs, e.g. golf, rugby etc. but also opportunities to attract new/relocate other clubs to the area.
Ģ Attracts people down the river, canal and Torvean Quarry which we donÆt make the most of at present ¢ they are fantastic assets to the city and the more we can do to open it up for residents and visitors to use the better.
Ģ Over 3km of formalised cycle ways and foot paths created (this is just on South side of river ¢ nothing formalised for north side)
Ģ Potential for establishing international-level cross country running routes which would incorporate various built and natural landmarks in the area

Ģ Greater access to sports facilities, particularly for people on the south side of the city. No need to go into Centre only to come back out again.
Ģ Creating walkable and cycling friendly neighbours which are well connected to the rest of the city and have direct active travel links to other parts of the city.
Ģ Better access to medical facilities
Ģ Better access to shops and other businesses
Ģ Improved route for the National Cycle Network 78
Ģ Shorter journey times between the A9 and A82.
Ģ Overall, a better connected city which allows a more equal flow of people to the cityÆs assets and facilities.

Members today approved a modest 3% rent increase for residential rents and service charges following detailed consultation with tenants.   The increase will result in a rise in the average weekly council house rent from ┬Ż75.38 to ┬Ż77.74 (┬Ż2.26), which means that Highland rents are still 8th lowest of the 26 councils which retain housing.
[Local Authority]
12/2/2020