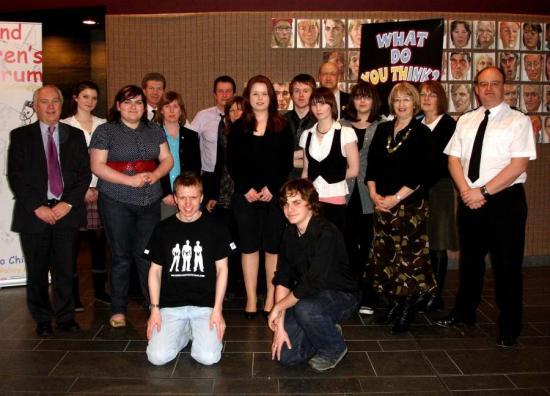 Young people from across the Highlands recently got the chance for the third year running to play the "Apprentice" by shadowing senior officials within The Highland Council's Glenurquhart offices in Inverness and partner agencies.

The executive of Highland Youth Voice, the youth parliament for the Highlands, have found this event to be the best way of developing their links with policy makers and decision-takers. Working with the Council's Youth Development team they organise this day for members of the Youth Voice Executive and area forums to shadow key officials in Housing; Social Work; Education, Culture and Sport; Finance; Planning; Community Care; Environmental Health and Police.

The young people's aims were to raise awareness of Highland Youth Voice and local youth forums, to explore the relevance of services to young people and to inform senior managers on young people's perceptions of the services they provide.

With some young people travelling from as far away as Wick, the day started at 9.00am and involved them taking part in a range of meetings and informal discussions in and around Inverness. The day then culminated in an early meal at the Eden Court Restaurant where informal discussions continued.

Garry Sutherland, Deputy Chief Constable for Northern Constabulary said: "It was a very rewarding day and is something I would like to see developed as our links with young people are very important.

"Unfortunately young people are not always portrayed in a way that is fair or representative but in my experience the vast majority make a very positive contribution to our communities and need to be heard."

Anna Dougan, Chairperson of the Highland Youth Voice Executive, said: "The day was a great success and enjoyed by all involved and certainly gave me an appreciation of the breadth of work and challenges The Highland Council and Police face. I was pleased to hear from the officials we met, an appreciation that young people are doing a lot of good work and contributing to society in a worth while way and we were all given plenty of encouragement to get involved."