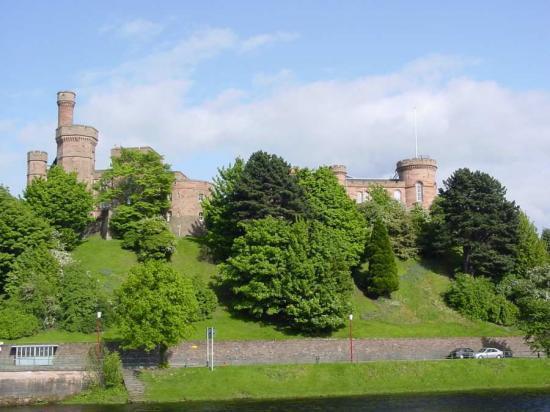 Progress in the transformation of Inverness Castle to become a new visitor attraction for the city was marked today with the announcement of contracts awarded to the architect and the creative director for the project.

The Inverness Castle project forms part of the Inverness and Highland City-Region deal. The City-Region deal is a joint initiative supported by up to £315m investment from the UK and Scottish governments, The Highland Council, HIE and University of the Highlands and Islands, aimed at stimulating sustainable regional economic growth.

For the architect services, LDN Architects bring their conservation architectural experience to the transformation of the Castle from its current use as a court house to a future visitor attraction. The Inverness Castle project is a vital part of the regeneration of the city centre and will be a gateway for Highland tourism. The project will support economic growth in the city and throughout the Highland area, creating a sustainable, viable and "must-see" attraction that will celebrate the spirit of the Highlands.

The architect's brief will focus on refurbishment of the Castle, and the transformation will involve dialogue with Historic Environment Scotland, The Highland Council, High Life Highland, the people of Inverness and the Highlands, as well as many other stakeholders in the coming months.

Creative Services, led by Bryan Beattie, will lead the creative direction for the Inverness Castle project, supporting development of the identity for the new international quality Inverness Castle visitor attraction, as well as preparing a programme of events involving people living and working in the Highlands. They will also support the development of partnerships with creative producers, organisations, agencies and networks to maximise promotional and creative opportunities for the project.

Cabinet Secretary for Rural Economy Fergus Ewing said:"These appointments mark another important step forward in progressing the development of Inverness Castle. This key project from the Scottish Government is being supported through the City Region Deal. It will help to revitalise the city centre, as well as the wider Highlands, benefiting both locals and tourists."

The Provost of Inverness and Area, Cllr Helen Carmichael, said:"The appointment of both LDN Architects and Creative Services is an important step in the development of this exciting project. With support from Scottish Government through the Inverness and Highland City-Region Deal, we are ensuring the ambitious Inverness Castle project will bring benefits and sustainability to the whole Highland economy through development of our unique tourism assets in the long term."

Stuart MacKellar of LDN Architects said:"We are delighted to be involved with the Inverness Castle development, given the importance of the project to the city centre and the economic development of the Highlands. As architect for the recent improvements to the neighbouring Inverness Town House, as well as a range of other heritage projects in the UK and beyond, we are excited to be bringing our experience to bear for the castle project."

Bryan Beattie of Creative Services said:"It's a tremendous privilege to be involved in one of the most important and ambitious infrastructure projects for both the city and the Highlands. We have been involved in a range of major culture, leisure and sporting infrastructure development projects including the V&A at Dundee, Fort Regent in Jersey, Battersea Power Station in London, as well as many other cultural attractions in the Highlands. We are very keen to work with people and organisations throughout the area on this project."

Inverness Castle building will become available for development after the Scottish Courts and Tribunals Service moves to the new Inverness Justice Centre.

The visitor attraction will add to the tourism offer in the area by creating a must-see visitor attraction that celebrates the spirit of the Highlands past, present and future, including its creativity, well-being, culture, heritage and natural environment.

The vision for the project includes:

The Castle Viewpoint - already complete and open to the public

New galleries to bring national and international exhibitions to the Highlands

New museum displays celebrating the culture and heritage of the Highlands

New visitor attractions showcasing all areas of the Highlands

Shops, restaurants, bars and cafes promoting the best of Highland crafts and produce

The development of public spaces within the Castle esplanade

Potential new hotel accommodation in the vicinity of the development

The attraction will be supported by a digital presence designed to encourage people to learn more about and to visit all parts of the Highlands.

The development of Inverness Castle is a Highland Council project, managed by High Life Highland on behalf of the Council. The Scottish Government, Highlands and Islands Enterprise, VisitScotland, Scottish Development International, Historic Environment Scotland, and Scottish Natural Heritage are partners in the project.

A delivery group, chaired by the Provost of Inverness and the Scottish Government's Cabinet Secretary for the Rural Economy, leads the project.

LDN Architects is an award-winning practice based in Edinburgh and Forres. They work throughout the UK on commissions of all scales. LDN is best known for their award-winning approach to conservation complemented with creative design; delivering projects that meet the aspirations of each client and buildings that enhance the lives of those who use them.

Creative Services is an independent cultural consultancy practice based in the Black Isle and founded in 1992 by current director Bryan Beattie. Since then it has undertaken over 300 short and long-term projects, from developing national cultural policy to writing television scripts. Bryan Beattie has strong roots in the Highlands’ cultural sector and has held roles including Chairman of Eden Court, Feis Rois, Eigg Box, and Booth Scotland; vice-Chairman of Ross and Cromarty Enterprise; elected representative of Highland Council and Highland Regional Council. Nationally, Bryan’s roles have included expert adviser to two Ministers of Culture, Chairman of Scottish Youth Theatre, and Board member of Scottish Screen.

Members at yesterday's previously adjourned and re-scheduled meeting of Highland Council voted to carry a motion introduced to make adjustments to the agenda in light of the situation in relation to COVID-19 and Brexit.   The urgent motion was proposed by Highland Council Leader Cllr Margaret Davidson and supported by the Leader of the official Opposition, Cllr Raymond Bremner.
[Local Authority]
7/1/2021

The Highland Council has issued a letter to all parents providing an update regarding the reopening of schools and early learning and childcare settings following the announcement made yesterday by the First Minister that the country is now in a national lockdown.   All Highland schools will remain open but the only pupils who should attend are those identified as vulnerable and the children of Key Workers when no other arrangements can be made.
[Local Authority]
7/1/2021

The Highland Council met today (7 January 2021) and took the opportunity to discuss Brexit.  A number of issues arising from the UK's exit from the EU were discussed and the complexity of the situation was recognised particularly since there are a number of other concurrent issues such as COVID.
[Local Authority]
7/1/2021

The Council wishes to provide re-assurance to communities that it's Winter Gritting teams are continuing to work extremely hard throughout the area during the current lock-down, providing a road and pavement gritting service following the Council's policy on prioritisation of routes.   Details of the council's highland wide and local area gritting policies and maps are on the Council’s website at www.highland.gov.uk/gritting.
[Local Authority]
7/1/2021

The Highland Council today launched the Temporary Business Closure Grant.  This grant is available for businesses who have had to close due to the COVID-19 protective measures introduced on Boxing Day.
[Local Authority]
6/1/2021

The Highland Council is giving more time for people to take part in it's draft food growing strategy - Growing Our Future.   The extension, until the 28 February, will allow outcomes from the up-coming Highland Good Food Conversation to be incorporated in the strategy.
[Local Authority]
3/1/2021

Still Time To Submit Your Cash Your Caithness Applications

Local groups in Caithness are reminded that the closing date for Your Cash Your Caithness applications is drawing near and to be in with a chance of receiving a share of £10,000.00, forms need to be received by 5.00pm on Sunday 2nd February 2020.   £10,000 of funding is available to let the local community decide for themselves which projects are needed in their area.
[Local Authority]
31/12/2020

Following the announcement from NHS Highland yesterday that the number of positive cases of Covid in the Highlands had tripled in just a few days, the Leader of The Highland Council is reminding everyone to follow all guidance and to remain extra vigilant.   Councillor Margaret Davidson said: "Up until now the low Covid numbers we have had in our area has been due to very high levels of compliance with the restrictions and the excellent partnership work across Council, NHS Highland and Police to successfully deal with local outbreaks.