Average 2 bedroom private rents up by 2.4% 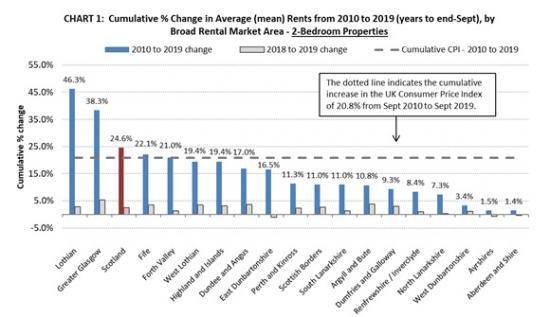 Between 2018 and 2019, 15 out of 18 Broad Rental Market Areas of Scotland have seen increases in average new let rents for 2 bedroom properties, ranging from 0.2% in North Lanarkshire, up to 5.3% in Greater Glasgow. Three areas have seen decreases, including Aberdeen and Shire which has seen a decrease of 0.3%, the fifth consecutive annual decrease, following decreased demand for rental properties in recent years due to the downturn in the oil industry. The Ayrshires also saw a decrease in the latest year of 0.7%, and East Dunbartonshire showed a decrease of 1.0%.

Over the longer term, across the period 2010 to 2019, average new let rents for 2 bedroom properties in Lothian, Greater Glasgow, Fife and Forth Valley have risen faster than the UK Consumer Price Index of 20.8% from Sept-10 to Sept-19 . Across this period, changes in average rents for 2 bedroom properties in other areas of the country have been below the rise in the consumer price index.

Statistics on private sector rent levels from 2010 to 2019 have been released today by Scotland's Chief Statistician. The following main findings are based on 2 bedroom properties because these are the most prevalent size of property in the private rented sector. Figures on average rents across all property size categories, i.e. for 1, 2, 3, and 4 bedroom properties as well as 1 bedroom shared properties, are available in the main publication.

Note in the main findings below that the underlying market evidence data used to collate the publication figures is largely based on advertised rents, therefore it is important to note that the statistics presented do not represent rent increases for existing tenants.

For the remaining areas of Scotland, cumulative increases over the last 9 years have ranged from 1.4% in Aberdeen and Shire to 22.1% in Fife. These regional trends combine to show a 24.6% cumulative increase in average rents from 2010 to 2019 for 2 bedroom properties at the Scotland level, from £536 to £668.

For the year to end-September 2019, Lothian had the highest average monthly rents for 2 bedroom properties across Scotland (£972). Other areas with higher than average (£668) rents included Greater Glasgow (£780) and East Dunbartonshire (£677). Areas with the lowest average rents for 2 bedroom properties were and the Scottish Borders (£490), North Lanarkshire (£488), Dumfries and Galloway (£476) and The Ayrshires (£471).

Figures on changes to rents over the period from 2010 to 2019 should be considered in the context of the cumulative increase in the UK Consumer Price Index of 20.8% from Sept-10 to Sept-19.