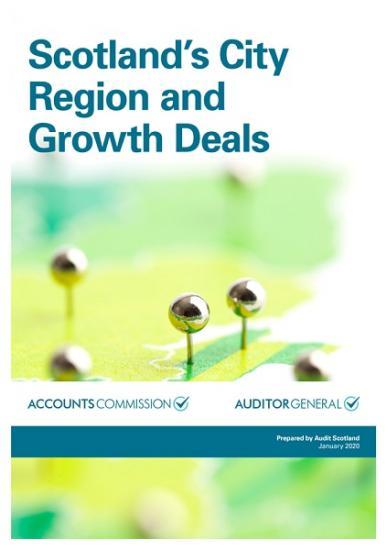 City deals have been positive for Scotland's economy, but the government does not have a plan to measure their overall long-term success, say public spending watchdogs.

City Region and Growth Deals have enabled economic development projects across Scotland that may not otherwise have gone ahead and sparked increased collaboration between councils and their partners. Eight deals worth £5.2 billion, mostly around infrastructure improvements, have been signed or agreed in principle, with more in the pipeline.

But the Scottish Government has not set out how it will measure the programme's value for money. It is also not clear why some deal projects were approved for funding over others, while local communities have had very little involvement in deals. These two factors have limited transparency around the process.

How accountability would work around individual deals if something went wrong also remains untested. And there is a risk that councils and their partners could struggle to deliver deal projects alongside the other challenges facing Scotland's public sector.

Graham Sharp, Chair of the Accounts Commission said:"City deals have had a positive effect across Scotland, strengthening relationships between councils, government, business, our universities and other partners.

"It's early days, but it's important lines of accountability for deals are now made clearer and that the right staff are in place to develop and deliver deals at a time of considerable financial pressure for councils and the wider public sector."

Caroline Gardner, Auditor General for Scotland, said:"A significant amount of public money has been committed to city deals, but the programme's lack of aims and objectives means opportunities may already have been missed to ensure deals contribute to national outcomes.

"The Scottish Government needs to show how it will measure deals' long-term success and work with councils to improve transparency around the approval process for individual projects."