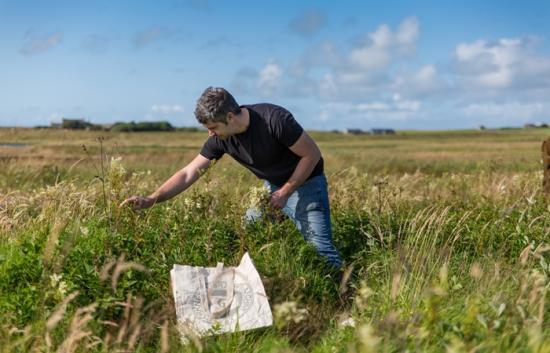 Founder of Orkney Craft Vinegar Limited, Sam Britten started the business in a garage in the village of Orphir in 2017. The award-winning firm has grown rapidly after becoming a favourite with celebrity chefs.

Sam now operates from a newly expanded facility in Kirkwall and plans to take on three new employees by the end of this year.

Highlands and Islands Enterprise (HIE) awarded a £12,842 grant to support the business purchase new equipment, including a bespoke aerator that is already speeding up the fermentation process. The aerator was built overseas and repurposed by a local Orkney engineer.

Sam produced a malt and seaweed using the new equipment in a matter of days rather than weeks. As it's more efficient than the one he fabricated at the outset, he is confident that it is a viable solution that will help meet the extra demand for his popular products.

Orkney Craft Vinegar makes six different kinds of vinegar. Some are seasonal, and each one has a unique flavour. All are made from scratch, fermenting the ingredients into alcohol in the forms of wine, mead or beer; then fermenting this potion to make vinegar.

The product is aged in wooden casks for up to a year taking on the flavour from the wood. Sam believes this solution in a converted Spanish oak barrel from Highland Park Whisky Distillery is the first of its kind.

The idea came about when Sam was working at Barony Mill, where the ancient grains of bere barley, which are being grown on Orkney once again, are being milled into meal and used for breads and whisky making.

The business is sustainable in many ways. For example, in the premium packaging, there's no plastic, just recyclable glass, paper and cork. In 2018 Orkney Craft Vinegar won Great Taste Awards from the Guild of Fine Foods. Along the way, they've become a favourite of influential chefs such as Nick Nairn, James Martin, and most recently Matt Tebbutt.

Sam, who moved from Nottingham to Orkney, said: "I wanted to do something slightly different with the bere barley and decided to make vinegar. In my previous job as a chef, vinegar was used as a seasoning and in lots of sauces so it made sense to me to use something local instead of importing it.

"We are committed to using only Orkney produce and there's a particular interest in the ingredients that we use such as the bere barley and sugar kelp seaweed which give the products their distinct flavours. It has to taste good first and foremost and secondly it’s got to be sustainable.

"We are delighted with the support from HIE to help enable us to purchase the equipment, which we are already seeing a massive difference in productivity."

Gavin Cameron, HIE account manager at the Orkney area team, said: “This is an excellent example of an innovative local food and drink company. Having the new equipment in place will allow the business to focus on meeting the increased demand for their products and expand into markets across the UK and beyond. This project will enable Sam to plan further growth and create new jobs in Orkney."