Support For Business During The Coronavirus Crisis 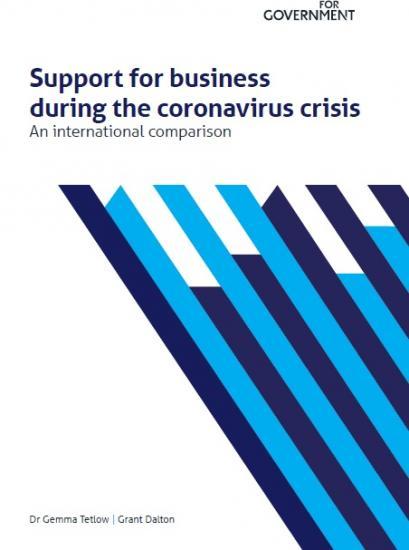 A report from the Institute for Government published on 6 October 2020.

The coronavirus crisis has led to widespread economic disruption across the world and prompted governments to step in with wide-ranging support for businesses and households.

This report summarises how national and subnational governments in nine advanced economies have so far supported businesses during the crisis through grants, tax cuts and tax deferrals, loans and equity stakes.

We highlight common themes and differences in the design and generosity of policies and how they are delivered and present early evidence on their effectiveness.

The coronavirus crisis and the subsequent restrictions imposed by governments have put businesses under severe strain across the world. Many businesses have been forced to close for some time, have had difficulties working at full capacity due to social distancing, or seen demand decline due to public economic and health fears. In

response, governments have rolled out various policies to support businesses. The aim of these is to prevent a crisis of liquidity turning into a crisis of solvency that would lead to widespread business failure and permanent economic damage. This report looks at the support offered to businesses in Canada, France, Germany, Ireland, Japan, New Zealand, Norway, Singapore and Sweden.

The policies that these governments have adopted can be split into two categories. The bulk of policies (particularly in the early stages of the crisis) were aimed at helping all businesses survive the initial shock caused by the spread of the virus and - in most cases

- extensive economic lockdown. These ‘rescue' policies have been particularly focused on cashflow, ensuring businesses received money quickly to avoid their being forced into bankruptcy as revenues dried up. A second set of policies has focused on helping the economy ‘recover' and restructure once the threat of Covid wanes.

The countries we examine in this report have used a similar set of tools to help businesses as has the UK: deferring and cancelling some business taxes; offering grants to struggling firms; and guaranteeing or directly providing loans to ease cashflow problems. Table 1 summarises the main measures each country has implemented.

Many of these schemes have been open to all businesses but all the countries in this study also provided some sector-specific support, mainly to those firms that have been hardest hit - usually the travel, tourism or hospitality industries - but also to start-ups,

exporting firms and strategically important businesses. All governments have targeted the most generous support at smaller firms. This latter targeting has been justified in most cases by the fact that the majority of employees in those countries work for small

and medium-sized enterprises (SMEs) and that those firms had fewer resources to deal with a crisis. None bar Germany has yet used government equity investment as a central part of their overall package of business support, although several countries have taken stakes in national airlines. Most countries that have provided equity injections or large-scale loans to big businesses have required the companies to fulfil certain criteria, notably on restricting dividends and senior pay and meeting environmental targets.

This picture of uniformity, despite varied economic models and political leadership, reflects the uniformity of the shock experienced by governments, and the fact that governments were generally keen - particularly in the early stages of the crisis - to do everything in their power to support businesses through a large, very rapid and

predominantly government-induced economic shutdown. But the precise design and delivery of the policies has varied across countries. Because of the speed with which governments had to respond, many of the schemes have made use of existing policies and institutions. For example, governments have channelled lending to businesses through state-owned banks and state investment agencies and helped businesses with their cashflow by allowing firms to defer tax payments or claim refunds of previous years' taxes.

Because of the scale of the crisis and its widespread impact, most of the policies have been designed and funded by central government. In most of these countries, subnational governments did not have the fiscal firepower to provide the scale of support needed. The extent of the economic hit from Covid has also not been well correlated with subnational governments' fiscal capacity - so there has been a need for within-country redistribution of resources by central government. But most countries have made use of subnational authorities and public bodies to help implement business support programmes and some subnational governments have designed and funded their own schemes, which have mainly been used to target support at the types of businesses or sectors that are deemed most important in a particular area. The extent of support provided to businesses at a subnational level has been

particularly high in Germany, Japan, France and Canada, the largest economies included here and - in the case of Germany and Canada - the only federations.

To the extent that support has been provided at a subnational level, it has generally been provided at a state/region/prefecture level (that is, at the first step down from the federal or central government). In larger countries, support provided to businesses at a local level has an advantage over national support, in that it can be adapted to suit local conditions and distributed according to specific local knowledge of the businesses in need.

In designing these schemes, governments have had to weigh up competing concerns. There is the risk that taxpayer money is wasted by programmes that distribute money quickly and widely but are poorly targeted and so have significant ‘deadweight' costs -

giving money to firms that could survive on their own. Early in the crisis, this concern had to be weighed against the risk of imposing too many conditions (in the hope of targeting money more effectively) and risking viable businesses going under and the country suffering greater long-term economic harm from coronavirus than necessary. But as the crisis wears on – and particularly if evidence emerges that some of the changes induced by Covid may be long-lasting – governments may be keen not to spend money keeping businesses afloat that have no long-term future, hindering economic restructuring and weighing on growth for many years.

With the health crisis and resulting economic disruption still ongoing, it is not possible to judge the success of the business support policies pursued by these governments fully. This must be done by assessing their long-term, as well as short-term, impact – as well as how well they matched the different priorities set out by each government. However, there are still some ways we can assess their effectiveness at this early stage:

Usage: The schemes cannot help if they are not used. There has been considerable variation in how widely schemes have been used, particularly among government supported loan schemes, which have distributed between 5% of GDP (France) and 0.05% of GDP (Sweden) in funding to businesses. This variation is partly attributable to the generosity and design of the schemes.

In the early phase of the crisis, most governments acted quickly to delay tax payments, provide businesses with grants, ensure firms continued to have access to credit and – in some cases – adjust bankruptcy procedures to ensure solvent but illiquid firms were

not forced into administration. The focus in that early phase was to keep businesses afloat through the economic shutdown. All these countries avoided a sharp rise in business failure – to that extent, the policies they deployed were effective. With coronavirus continuing to pose a threat around the world, most of the countries

we examine in this report are maintaining some of the policies that were adopted at the start of the crisis in some form. Most tax changes and business grants have been finite, either limited by time period or amount. But some countries have chosen to extend grant schemes. For example, Canada's rent subsidy scheme was extended to cover September 2020, while France's monthly grants have been made available for the tourist sector until the end of the year.

Most countries have also made loan guarantees available until the end of the year (as in France and New Zealand) or even longer – Germany's KfW special loans and Singapore's working capital loans will be available until March 2021. In the UK, chancellor Rishi Sunak announced in late September that the application period for the main UK-wide government guaranteed business loans would be extended to the end of the year.

Where schemes have not been extended, some governments are now under pressure to do more. For example, the Norwegian government is facing calls to reintroduce business grants that ended at the start of September. As the threat from the disease changes and restrictions on economic activity change, governments will need to amend their business support programmes to ensure that taxpayer funds are well targeted and that their economies remain dynamic, while minimising the risk of short-term pain and long-term economic scarring from widespread business failure. Governments are increasingly trying to understand which of the impacts of Covid-19 (whether on consumer behaviour or the ways businesses must operate) are likely to be long-lasting and which will be temporary – and to tailor policy appropriately. Governments will want to support businesses that continue to face temporary restrictions on their activities. But they will also become increasingly concerned about avoiding wasting taxpayer money on propping up businesses with no long-term future (including by hindering the normal process of creative destruction) or incurring large deadweight costs by

supporting businesses that could survive on their own. It will become increasingly important to ensure policies are designed such that businesses are incentivised to cease claiming support as their economic prospects improve. For those businesses that face long-term problems, governments must decide whether they warrant ongoing taxpayer support.

To make most efficient use of taxpayer money, any new schemes should focus on the issues companies face at this stage of the crisis, rather than trying to compensate those who were hardest hit in the spring. For example, schemes could focus specifically on

the firms or parts of the country still forced to close by government, or target sectors that are still suffering from particularly low demand but where demand is ultimately expected to return (for instance, tourism). Germany, for example, has introduced specific support for nightclubs and events companies, and the Irish government has

allocated a ‘top-up' of between 20% and 40% to payments of the Restart Grant Plus in counties Kildare, Offaly and Laois, which had been subject to local lockdowns. As a previous Institute for g government report argued, "a longer drawn out recession, which would turn a crisis of liquidity into a crisis of solvency, may demand more imaginative use of equity and grants [rather than loans]", because unaffordable loans will weigh on future firm behaviour. However, any such grants or equity injections must also be accompanied by "a tougher attitude towards the economic prospects of the businesses being helped".

As and when firms have greater certainty about what the future holds, governments should provide support to encourage restructuring and adaptation in business. This is where targeted schemes (like those in Singapore and Ireland), funding businesses to innovate and change their operating models to adapt to the post-crisis economy, may be useful, especially when linked to maintaining employment.