The Temporary Benefit Increases Beyond 2020-21 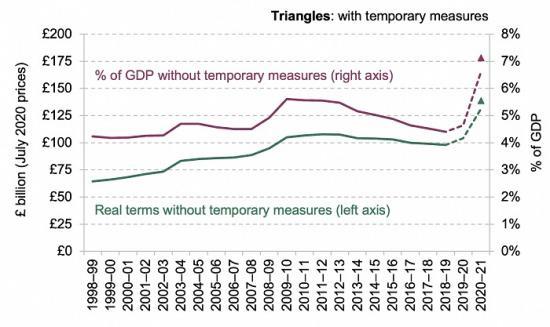 The COVID-19 crisis has led to a profound shock to the labour market, one consequence of which is a rising number of claimants of means-tested benefits and higher entitlements among existing claimants. The Office for Budget Responsibility forecast that these effects will lead to an increase in benefit spending of £25 billion in 2020-21.

On top of that, the government has announced several temporary expansions to the welfare system, including increasing the universal credit (UC) standard allowance by around £1,000 per year, suspending the ‘minimum income floor' (and so boosting benefit entitlements among low-income self-employed claimants) and raising the maximum amount of housing support for private renters. Together, the temporary giveaways (including related changes to the legacy benefits system) cost an additional £9 billion. Between the boost to spending from underlying economic weakness and the government's temporary giveaways, this year will see working-age benefit spending rise to 7% of national income - easily the highest level on record.

The government will soon have to decide on the future of these temporary giveaways. In some cases, they relate to areas of the benefit system that were already ripe for reform prior to the onset of the crisis. Now is therefore a natural time to think about the design of these parts of the system. In this chapter, we discuss the options that the government faces in unwinding, adjusting or making permanent these temporary expansions.

The number of families claiming universal credit (UC) has increased from 2.6 million in February 2020 to 4.2 million in May 2020. Claimants are receiving higher entitlements than they were before - due to both the changes in their circumstances and the temporary increase in generosity of working-age benefits. Consequently, spending on working-age benefits is now forecast to be 7% of national income in 2020-21. This is 2% of national income higher than it was last year and the highest it has been since records began in 1978–79.

The temporary, £1,000-a-year increase in the UC standard allowance is due to expire in April 2021. If the number of UC claimants is the same in March 2021 as it was in May 2020, this would see 4 million families lose an average of 13% of their benefits overnight. Some families would be hit even harder: for example, a single, childless homeowner who is out of paid work would see their UC entitlement cut by 21%.

Choosing instead to make the increase in the standard allowance permanent would, in the long run, cost the government £6.6 billion per year (in today's prices), adding roughly 10% to the annual cost of UC, though undoing only a fraction of the cuts to benefits implemented since 2010. This would represent a bigger increase to the entitlements of out-of-work claimants without children than has been seen over the whole of the past 45 years. Nonetheless, the UK’s system of support for out-of-work claimants would remain very thin by international standards.

The minimum income floor (MIF) in the UC system caps UC entitlements among the low-income self-employed at the same level as for full-time minimum-wage employees. The MIF has been temporarily suspended; permanently abolishing it would cost £1.4 billion in the long run and would create some big winners, with around 450,000 self-employed households gaining an average £3,200 per year. Most of these households are in the bottom fifth of the income distribution.

The MIF has sensible aims: combating fraud and avoiding subsidising non-viable self-employment. But there is room for improvement in its design; it penalises self-employed workers with fluctuating or seasonal incomes, compared with those whose incomes are more stable. Instead of abolishing it, the government should consider adopting a cap based on a 12-month rolling average of earnings. While there is a concern that the MIF chokes off otherwise viable businesses in their first few years of operation, we find that – even before the introduction of the MIF – self-employed workers on means-tested benefits did not, on average, see significant increases in earnings over time. In fact, two-thirds of those who remained in self-employment still earned below the MIF three years after becoming self-employed.

Prior to the pandemic, the link between local rents and the amount of housing support for low-income private renters had broken down; bizarrely, maximum support related to local rents in 2011. This meant that – rather arbitrarily – families in some high-rent areas were eligible for less support than those in low-rent ones. The government has temporarily re-established the link, by setting the maximum housing support level so it covers the rent of 30% of local rental properties in the private sector. A link to contemporaneous local rents is clearly more sensible than the pre-COVID system, and the government should not return to the latter.

Making the increase to housing support permanent would cost about £1 billion per year, with renters in London gaining the most. Alternatively, the government could set the maximum support level so that it covers 20% (rather than 30%) of local rented properties. That would cost about the same as the pre-COVID system, but be fairer and less arbitrary.