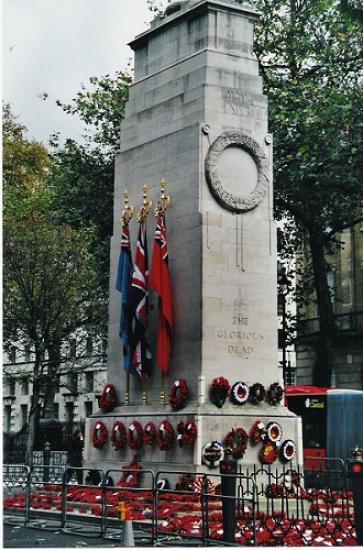 Government has provided advice to Local Authorities in England for events at community war memorials.

Service will take place behind closed doors and broadcast to the nation on BBC One.

Culture Secretary Oliver Dowden has asked members of the public to mark this year's Remembrance Sunday service on Sunday 8 November at home rather than head to the Cenotaph due to the ongoing global coronavirus pandemic.

Around 10,000 people usually gather at the Cenotaph each year for the National Service of Remembrance and the two minute silence at 11 AM. This year, for the first time in history, the event will be closed to members of the public in line with the latest expert medical and scientific advice.

The service is expected to go ahead with representatives of the Royal Family, the Government and the Armed Forces, and a small representation from the Commonwealth, other countries and territories, all laying wreaths at the Cenotaph. The annual march past the Cenotaph will not take place, but some veterans will be invited to attend the service which will be made covid-secure by minimising attendance and ensuring strict social distancing measures are in place.

The public are urged to remember all those who paid the ultimate sacrifice by coming together for a national moment of silence at 11am as the service is broadcast nationwide on BBC One.

The government has also today provided advice for councils in England on how to ensure that those hosting local Remembrance events can do so safely. Measures include reducing numbers, focusing attendance on those wishing to lay wreaths, and observing social distancing at all times.

All gatherings involving more than 6 people will need to be organised by a business, a charitable, benevolent or philanthropic institution or a public body. Organisers will also be required to carry out a risk assessment to limit the risk of transmission of the virus.

Culture Secretary Oliver Dowden said:This Remembrance Sunday has a particular significance as it marks one hundred years since the Cenotaph was installed. Whilst we will mark this occasion properly, it is with a heavy heart that I must ask people not to attend the ceremony at the Cenotaph this year in order to keep veterans and the public safe. We will ensure our plans for the day are a fitting tribute to those who paid the ultimate sacrifice and that our veterans are at the heart of the service - with the nation able to watch safely from home.

Communities Secretary Rt Hon Robert Jenrick MP said:We will not let these difficult times stop us from properly commemorating the sacrifices of those who protected this country in our darkest hour, and those who are serving in our Armed Forces today.

That's why we have published advice for councils, so that local Remembrance Day events can take place safely and communities are able to honour our brave service men and women. We are safer because of the sacrifices they have made and the battles they have fought.

Defence Secretary, Ben Wallace said:I am as disappointed as the rest of the armed forces community that our usual arrangements for Remembrance Sunday cannot go ahead as normal. However, like the successful VE and VJ Day commemorations, the Armed Forces will join with The Royal British Legion to lead the nation once again in showing our respects to those who have made the ultimate sacrifice.

The decision not to proceed with the annual March Past the Cenotaph has been taken by the Government based on expert advice to protect the health and well-being of all those would have been travelling to and participating in the event. Whilst it is deeply disappointing that the march will not be taking place this year, we can all still play a part in ensuring we mark the occasion appropriately and pay tribute to the service and sacrifice of our Armed Forces on Remembrance Sunday. We are encouraging people across the country to participate in their own personal moment of Remembrance whether that be watching the Service on television or pausing for the Two Minute Silence.

Remembrance Sunday holds a special place in our national life and I know that many people will be disappointed that they won’t be able to attend this year.

But the key part of Remembrance is taking a moment to recognise those who have given their lives protecting this country. I hope that everyone will still be able to reflect on this sacrifice this year, despite the different arrangements.

This year also marks the centenary of the unveiling of the permanent Cenotaph by King George V on Armistice Day 1920 and of the interment of the Tomb of the Unknown Warrior in Westminster Abbey.

Meaning ‘empty tomb’, the Cenotaph symbolises the unprecedented losses of the First World War and is dedicated to ‘The Glorious Dead’. The Cenotaph was designed by Edwin Lutyens and was initially erected as a temporary structure for Peace Day in July 1919. The structure was so popular a permanent version was commissioned. Since then, the Cenotaph has become the focal point of national commemoration. Details of plans to mark this moment will be announced in due course.

The Unknown Warrior was an idea conceived by a Chaplain on the front, the Rev David Railton, after seeing a grave with a rough cross on which were pencilled the words "An Unknown British Soldier". He suggested that an unidentified Soldier from the battlefields of Europe be selected at random and transported to England and be buried amongst the Kings and Queens of Westminster Abbey. King George V led the procession and Gun Carriage that carried the coffin of the Unknown Warrior and was Chief Mourner for the service at Westminster Abbey that followed the unveiling of the permanent Cenotaph on Whitehall.