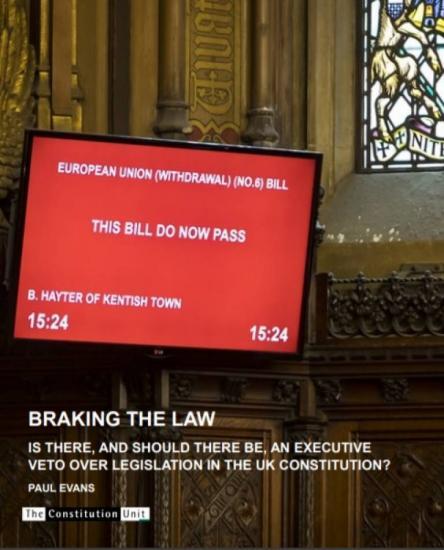 Twice in 2019, parliament passed legislation which mandated the Prime Minister to seek a Brexit extension, in direct contradiction to government policy. There were suggestions at the time that ministers might try to veto the legislation by advising the Queen to refuse royal assent. But these suggestions were highly controversial precisely because it was not clear whether the government in fact had any such power.

The Unit's new report - written by Honorary Senior Research Fellow and former senior Commons clerk Paul Evans - assesses the executive veto in light of these controversies. Analysing Westminster procedure, and drawing on international comparisons, the report asks whether the executive can, or should be able to, block legislation agreed by parliament.

The idea of refusing royal assent to a bill is now defunct. There is no clear way for the government to apply a retrospective veto after a bill has completed its parliamentary stages.

The most common way for a government to block legislation is simply to use its control of the House of Commons' agenda to prevent a bill from ever being considered. The events of 2019, though, show that this obstacle can be overcome in certain circumstances if a Commons majority exists to do so.

Bills which relate to the sovereign's prerogative powers have another potential veto built into them, in the form of the requirement for ‘Queen's consent'. But this is now simply a formality; even if the government were to try to refuse Queen's consent, parliament could bypass it.

A more active executive veto exists in the form of the ‘rule of Crown initiative', under which the government must consent to any bill which initiates or increases public spending. This rule does tilt power toward the executive, even in situations when a Commons majority might disagree. However, the rule also reflects the executive's responsibility for the national budget, and versions of it can be widely found outside the UK.

Many of these possible executive vetoes are currently governed by constitutional conventions. But, as the controversies of 2019 show, these conventions are not sufficiently clear and unambiguous. They should now be codified; it should be made clear that royal assent and the Queen's consent cannot be used as an executive veto, and, drawing on lessons from international comparators, greater transparency should be introduced into the executive's control over spending.

The report's conclusions are founded on the principle that the executive should not be able unilaterally to veto legislation which is supported by a parliamentary majority.