The IFS Deaton Review Of Inequalities: A New Year's Message 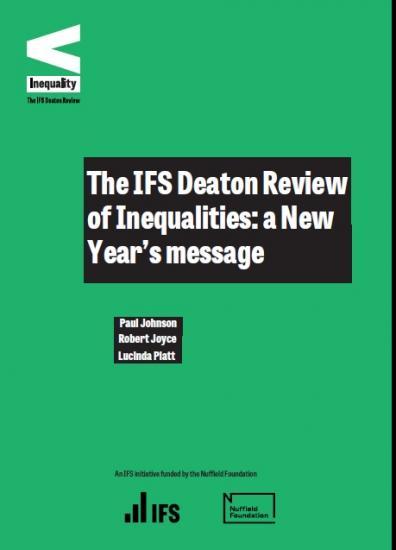 A year and a half ago we launched the IFS Deaton Review of Inequalities. When we did so, the chair of the Review, Nobel Laureate Sir Angus Deaton, raised the possibility that inequalities may prove a threat to our economic, social and political systems unless they are tackled effectively.

We also argued, among other things, that we lacked a coherent understanding of how key forms of inequality relate to each other: such as inequalities in health, income, wealth, educational opportunity and family life, and gaps between rich and poor, different parts of the country, different ethnic groups and different genders.

Since then, the world has changed more than any of us could have imagined. And yet COVID-19 seems to have shone a light on many of the issues we raised pre-pandemic, more vividly than we ever could have. It has cruelly exposed huge variations in how easily we are able to weather threats to livelihoods, to educational progress, to physical and mental health. These disparities have been closely correlated with pre-existing inequalities between groups according to their education, income, location and ethnicity - in ways that are often hard to disentangle, but depressingly familiar.

At the same time, public policy responses have been of a type and magnitude previously unimaginable. The shape and scale of these responses reflect the severity of the crisis and cannot be sustained, but they illustrate the power of governments to intervene to shape and mitigate inequalities. They surely provide succour to those, like us, who believe that the inequalities we saw before the crisis struck were not immutable.

2021 will be a key year for the Review. We will be publishing a huge amount of material from its major evidence-gathering phase which has been ongoing since late 2019. This will span topics from public attitudes towards inequality to inequalities in income, health and political inclusion, to inequalities by geography, gender and ethnicity, to the role of firms, trade, migration, labour market institutions, tax and transfer policy and much more besides. The aim will then be to use this evidence to build conclusions about how inequalities should most effectively be tackled.

As we embark on the new year, we wanted to take this opportunity to reflect on what 2020 told us about where we stand.

The COVID crisis has exacerbated inequalities between the high- and low-paid and between graduates and non-graduates. Average graduate earnings were more than 60% above those for non-graduates pre-crisis. New divides have opened. Non-graduates were far more likely than graduates to work in a locked-down sector and far less likely to be able to work from home. By the third quarter of 2020, when compared with pre-pandemic levels, there had been a 7% reduction in the number of graduates doing any hours of paid work in a given week, but a 17% reduction in the number of non-graduates doing any hours of paid work (these reductions include those on furlough but not working any hours).

The crisis has hit the self-employed and others in insecure and non-traditional forms of employment especially hard. Ten years after the financial crisis, the self-employed still had median earnings below 2008 levels. They have been especially likely to lose income and hours of work through the crisis, and numbers of self-employed have fallen nearly 10% over the year. The government has struggled to target support on those worst hit or to provide a comprehensive support package. The Self-Employment Income Support Scheme does not cover around 2 million people with some self-employment income, or a substantial additional number with incorporated businesses taking income in some combination of salary and dividends. This is an illustration of the difficulty the welfare state has in providing for those in non-traditional forms of employment.

Educational inequalities will almost certainly have been exacerbated by the crisis. Pupils at private schools were twice as likely as state-school pupils to get daily online lessons during lockdown. Within the state sector, pupils from better-off homes were more likely to receive active support from schools and to have a better home learning environment. Since July, pupils from poorer areas and households have been more likely to miss days from school.

Between March and July, mortality rates from COVID-19 were twice as high in the most deprived areas as in the least deprived. Deaths from COVID have been, if anything, even more socially graded than pre-existing disparities in other deaths.

The crisis has had very different impacts on different ethnic groups. Mortality rates from COVID-19 among some black groups have been twice those among the white British. This is in part related to occupational differences. More than 20% of black African working-age women, for example, are employed in health and social care. Some ethnic groups have also had their livelihoods more disrupted, being much more likely than the population as a whole to work in locked-down sectors or to be self-employed.

Through 2020, pensioners have on average reported becoming financially better off, whilst the young have borne the brunt of job and income loss. The generational divide that has opened up in recent years could also be exacerbated by another bout of ultra-low interest rates and quantitative easing which could push up asset prices. Fiscal policy post-pandemic must recognise this: it strengthens the case for tax and spending measures to lean in the opposite direction, rather than exacerbating the disparity as has happened over the last decade.