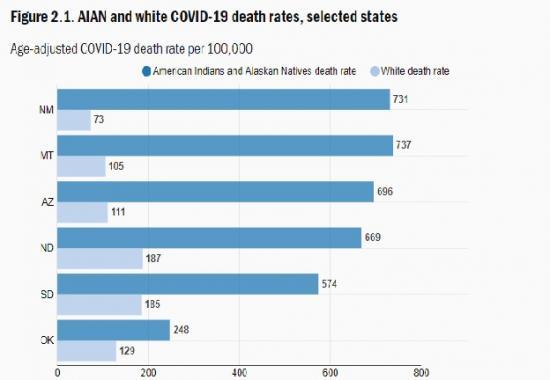 This article was published on the Brookings web site on 18 February 2021.

American Indians and Alaska Natives (AIAN) are dying of COVID-19 at much higher rates and at younger ages than other groups. In some states, the COVID-19 death rate for AIAN people is similar to that of whites who are 20 to 30 years older. These disparities-together with both a recent and long history of racism and crimes against First Nations-make a strong case that federal, state, and local governments should make every effort to work with Tribal governments and the Indian Health Services (IHS) to ensure scarce vaccine resources are allocated to, and ultimately reach, American Indians and Alaska Natives of all ages as soon as possible.

Recent media reports point to high death rates and highlight the loss of elders and fluent Indigenous language speakers. Here we show that analyzing death rates by age and focusing on states where data are most complete reveals even more shocking disparities.

People 85 and older account for a smaller share of deaths among AIAN people in part because large disparities in death rates at younger ages even absent COVID-19 mean that too many American Indians and Alaska Natives never make it to older ages in the first place. Although the numbers are relatively small, the rate of deaths at older ages is alarming. Figure 4 shows age-specific death rates for white and AIAN people in the three states with the most disproportionate AIAN mortality from Figure 2. For example, COVID-19 death rates for 35-44 year-olds in Arizona are 9 and 250 per 100,000 for white and AIAN people, respectively.

The above are extracts from the article which contains many more frightening statistics on how Covid19 is devastating native peoples in USA.