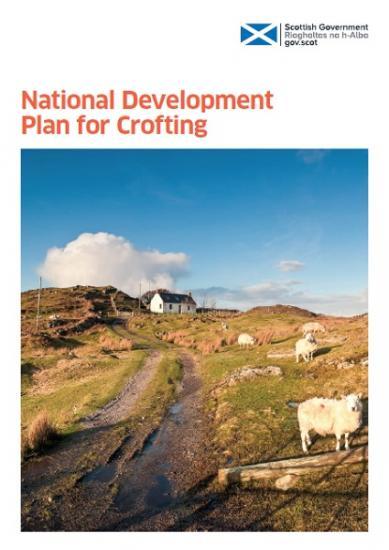 The Scottish Government have published their long-awaited National Development Plan for Crofting today. Having shelved promises to legislate in this Parliament to correct the errors they made in previous legislation this is a too little too late.

Rhoda Grant, Scottish Labour Spokesperson for the Rural Economy said: "Once again, what we have from the Scottish Government are warm words but little action. They continue to promise much but have so far consistently failed to deliver.

"The crofting legislation has needed fixing for years, and the reform this Government repeatedly pledged to bring forward for the last five years has still not materialised. Instead, we get a vague document in the final days of this Parliament which is telling about how little concern they have for the matter.

"This isn't just policy; it is people's lives. People who need access to housing, to financial support, and to legislation that actually works for them, written in conjunction with them."

Scottish Government - A plan has been published setting out how crofting can be supported to flourish in the future.

The National Development Plan for Crofting highlights the core elements necessary to ensure that crofting continues to play an integral role in rural and island life, as well as delivering policy priorities for climate change mitigation and biodiversity.

The plan was developed by The Scottish Government, working closely with key stakeholders.

Rural Economy Secretary Fergus Ewing said:"Crofting has a special place in Scotland's cultural heritage. In many cases rural and remote rural communities would not exist if it was not for crofting. We recognise the vital role farmers and crofters play, especially through the pandemic when they have worked tirelessly to put food on the table for the people of Scotland and I want to offer my thanks to them.

"We now need to realise the potential for croft land to address the climate change and biodiversity challenges and to support thriving rural communities. Land is a key asset, and we need to optimise its use to produce food more sustainably, to cut emissions and enhance our environment.

"We need crofters to adapt to new circumstances and encourage modern approaches to crofting, with diversification into agri-tourism, woodland regeneration and creation, local food networks, and the restoration of our degraded peatlands. This plan has been developed with key stakeholders and we will continue to work them, including the Crofting Commission, which is critical to the wellbeing of crofting.

“Speaking recently to leaders of the crofting communities, the Scottish Crofting Federation, they expressed their view that there are a great number of people who would wish to become crofters. In fact in the last two years we have seen 830 more people join that community. So we want to help enable this to happen and help us welcome more people to the crofting community.

“This National Development Plan is a step in that direction and sets out the ways in which we can keep people on the land and support them to live productive and sustainable lives and can secure a vibrant and resilient future for a unique way of Scottish life."