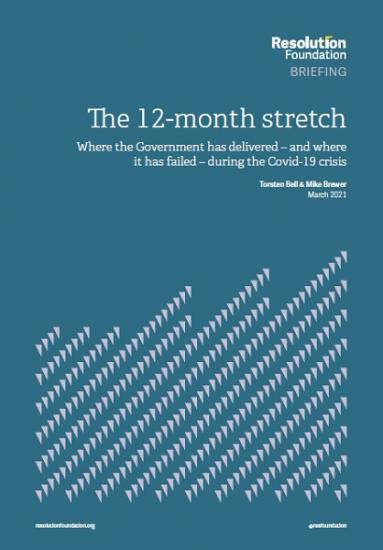 The Covid-19 pandemic, twelve months on from the first lockdown on 23 March 2021, has been marked by big successes on income support and vaccines, repeated failures on lockdown that have cost lives and deepened the economic crisis, and a legacy of inequality that needs to be addressed in the recovery, according to new Resolution Foundation research published Thursday 18th March 2021.

The 12-month stretch explores the last 12 months of the pandemic through the health crisis, the economic crisis, and their impact on households' ability to cope financially.

The report highlights two key successes in terms of the Government's response to the pandemic - vaccines and support to protect firms and workers.

The UK was the first country to start a clinically-approved vaccine trial on 8th December, is delivering jabs three times faster than Europe, has given 25 million people their first dose, and is on course to vaccinate all adults aged 50 and over by early April.

Similarly, the Chancellor went big, bold and early on delivering vital income support for workers and their families. Of the £340 billion of emergency Covid support provided so far, over half (£186 billion) has directly supported households and firms - via the furlough scheme, benefits uplift and grants for companies and the self-employed.

This support - equivalent to £6,700 for every household in Britain - means that typical household incomes have remained flat during the past year and firm insolvencies have actually fallen, despite the economy experiencing its biggest contraction in over 300 years.

The 12-month stretch notes however that the Government's repeated failure to lockdown in time has been its biggest failure, and left England with higher death rates and worse economic outcomes.

The Foundation calculates that delaying the start of the latest lockdown until January, despite evidence of fast rising cases, is estimated to have led to around an extra 25,000 Covid-related deaths compared to the situation in which restrictions were put in place quickly enough to prevent the death rate rising from early December levels.

Delays to lockdowns also meant that they have then had to be tighter and longer lasting, leaving the UK to experience among the most stringent restrictions of all G7 economies over the past year. This helps to explain why the UK has had the deepest economic contraction among that group of countries, says the Foundation.

While everyone has been affected by the Covid-19 crisis, the report shows that its impact has not been felt evenly - with poorer households bearing the brunt of the health and economic crises.

The report notes that recent mortality rates in the most deprived parts of England have been almost twice that in the least deprived areas.

And while aggregate savings have surged during the crisis as restrictions have prevented higher income households from spending, the poorest fifth of households are 50 per cent more likely to have seen their savings deteriorate rather than rise during the crisis.

The Foundation says that these changes to saving and debt levels mean that the pandemic's economic legacy will be bigger gaps between rich and poor that last even as the recovery gets underway.

Mike Brewer, Chief Economist at the Resolution Foundation, said:"As we approach the first anniversary of the UK's first lockdown, it's important to take stock of where the Government has delivered - and where it has failed – during the Covid-19 crisis.

"Its record on delivering jabs to people’s arms and cash to people’s pockets has been hugely impressive. On both, the strategy of going big, bold and early has clearly paid off.

"In contrast, going timidly and late on lockdowns has been a disaster – causing many thousands of avoidable deaths. Furthermore, delays to restrictions have meant them needing to be tougher and longer-lasting than in other countries, thereby worsening the economic damage.

"The Covid-19 pandemic has touched everyone, but lower-income families have borne the brunt of the crisis in terms of their lives and livelihoods. This shouldn’t be forgotten as we look to rebuild post-pandemic Britain."

Issued by the Resolution Foundation - www.resolutionfoundation.org/