Homeworking In Scotland, An Insight From The Latest Economic Commentary 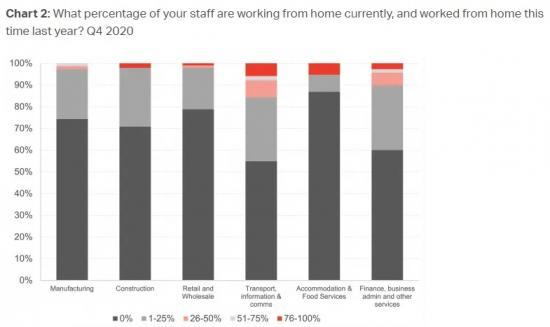 Article from the Fraser of Allender Institute.

Back in December, we discussed homeworking and whether this new way of working was here to stay.

The opinions of businesses and employees were mixed at the end of 2020. For those in favour, it was the benefits to productivity and reduction in commuting times that were attractive. But for those against homeworking, it was the reduction in office footprint that was noted as being a concern, particularly for businesses that rely on office footfall in cities.

This article provides an update to the analysis published at the end of last year, looking specifically at the opinions of businesses.

Homeworking in practice Occupations It is obvious that not all jobs can be performed at home.

Yet, those jobs that can be done from home tend to not only demand higher wages but also make up a large part of Scotland's labour market.

Professional, Associate Professionals and Technical occupations account for around 41% of jobs in Scotland, and demand 1.5 times the Scottish median hourly wage. But these occupations have also had the highest share of employees working from home during the pandemic. Chart 1.

Yet when we compare this to those occupations in sectors affected the most by the pandemic, such as Sales and Retail staff - where median hourly wages are one third lower than the Scottish average - only 16% have been able to work from home.

The outlook for the inequalities gap in Scotland is therefore worrisome.

Sectors The defining feature of the current economic crisis has been how it has affected different sectors differently.

In particular, the hospitality and retail sectors have seen the majority of staff furloughed given the inability for many of these jobs to be done at home.

Whereas sectors in which homeworking is easier done, such as the financial and administrative sectors, have remained more resilient.

Business Size Work from home practices have also been a feature for businesses of all sizes.

More than 1 in 2 businesses expressed that home working had increased in their organisation at the end of 2020.

This increase was the least prominent in small businesses, with just 66% agreeing that working from home had increased.

Large business saw the largest increases in home working. 93% of large businesses said that home working had increased, which represented a 13.5 p.p. increase on the previous quarter.

Only 10% of businesses said that homeworking had neither increased nor decreased at the end of 2020.

Whilst many argue that working from home has boosted productivity, some employers have argued that managing employee's performance has become more difficult.

Chart 4 highlights the feelings of businesses on a number of implications of homeworking.

Businesses feel that homeworking has made managing staff more difficult. They also feel that it has had a negative impact on innovation and collaboration in the workplace.

The majority of businesses also feel that productivity has not improved with homeworking.

Whilst the reviews on homeworking are mixed, the pandemic is far from over, meaning homeworking is here to stay in some capacity for the short-term.

And whilst many employees look forward to a time with office parties and water-cooler chats, many are warming to the idea of never going back to an office environment.

This has sparked discussion around what this means for the future of cities, and those businesses that rely on office footfall. In fact, only 9% of responding businesses thought their office footprint would not permanently reduce post pandemic.

With the average business expecting their office footfall to permanently reduce by 25-55%.

So, as we look forward to the future of working it appears as though a significant number of businesses will change the way they work when the economy opens back up. We may see a more flexible way of working with a blend between office and homeworking once this pandemic is over.