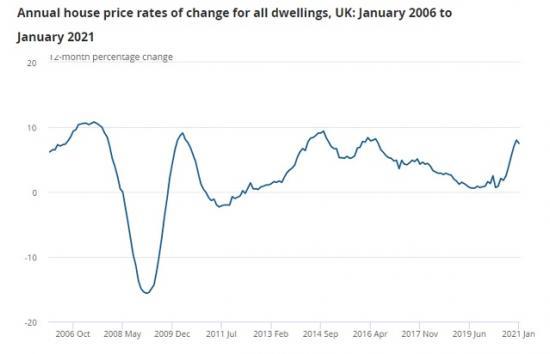 The North West was the English region which saw the highest annual growth in average house prices (12.0%), while the West Midlands saw the lowest (4.7%).

Over the past four years, there has been a general slowdown in UK house price growth, driven mainly by a slowdown in the south and east of England. The beginning of 2020 saw a pick-up in annual growth in the housing market before the coronavirus restrictions were put in place at the end of March 2020.

Price variations at the beginning of 2020 may reflect the unusual conditions in the housing market at the time. People were advised not to move house during the tightest restrictions in April and May 2020. As such, property transactions completed during that time may have been more concentrated than usual among those without complicating factors, such as a chain. For example, first-time buyers - typically at the lower end of the price scale - may have been freer to complete transactions than former owner-occupiers, who may have had to co-ordinate multiple sales during lockdown.

Recent price increases may reflect a range of factors including pent-up demand, some possible changes in housing preferences since the pandemic and a response to the changes made to property transaction taxes across the nations.

Pent-up demand may have contributed towards an increase in house prices. The Bank of England's Money and Credit January 2021 release reported that mortgage approvals for house purchases (an indicator of future lending) was 99,000 in January 2021, which is in line with the average of 100,000 since October 2020.

The pandemic may have also caused house buyers to reassess their housing preferences. In our UK HPI data, we have seen the average price of detached properties increase by 8.6% in the year to January 2021, in comparison with flats and maisonettes increasing by 2.6% over the same period.

On a non-seasonally adjusted basis, average house prices in the UK decreased by 0.5% between December 2020 and January 2021, compared with an increase of 0.1% in the same period a year ago.

On a seasonally adjusted basis, average house prices in the UK were unchanged between December 2020 and January 2021, following an increase of 1.0% in the previous month.