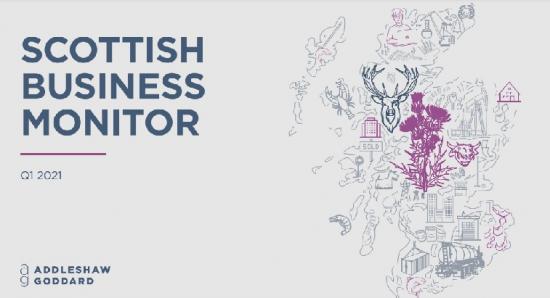 As restrictions start to ease and the wider economy re-opens across Scotland, the Scottish Business Monitor survey published on 28 April 2021, highlights that business sentiment has improved since the last quarter of 2020.

The latest Addleshaw Goddard Business Monitor report - produced in partnership with the University of Strathclyde's Fraser of Allander Institute - indicates that firms are more optimistic about their expected volume of business over the next six months with employment also expected to increase.

Following a survey conducted among more than 500 Scottish firms, almost 90% are confident that their chance of survival over the next six months is somewhat or very likely. The outlook for economic growth has also improved with 25% expecting a positive 12 months.

However, Brexit has created a negative impact on trading for nearly two-thirds (64%) of businesses which trade with the EU, with only three per cent reporting an increase in activity since the end of the UK's transition period.

Other key findings include:

The accommodation and hospitality sectors continue to have the lowest sentiment of all sectors. However, expectations over the next six months have improved.

89% of firms now rate their chances of survival over the next six months as somewhat or very likely. This is up from 79% in the previous Business Monitor survey.

The outlook for Scottish economic growth has improved. 25% of firms expect strong or very strong growth in the coming 12 months, compared to only 8% in the previous quarter.

Many businesses reported that homeworking has caused issues in performance managing staff, productivity, workplace innovation and organisational culture. However, 27% of firms plan to permanently reduce their office footprint.

There has been an increasing divergence between sectors which are consumer facing, and therefore likely to be experiencing restrictions, and the sectors which are not consumer facing. There are now more firms reporting growth in their sales than firms that are experiencing a decline in manufacturing, construction, and finance, business admin and other services sectors.

Mairi Spowage, director at the Fraser of Allander Institute, said: "As the country starts to emerge from a sustained period of lockdown, it is evident that this is a catalyst for the increased levels of optimism across all sectors. The hospitality and accommodation sectors have been two of the hardest hit throughout the pandemic, but we must take hope in that sentiment and expected level of business within these groups have improved over the next six months.

"Despite the increase in positive sentiment we shouldn't be disillusioned to think the economy will return to pre-pandemic levels quickly. We are still contending with the fallout of Brexit which has created negative trading conditions for firms across the board. These challenges are likely to have a long-term impact. However generally, we can remain confident that this will not hinder progress towards a strong economic recovery."

Alison Newton, Partner and Co-Head of Real Estate at Addleshaw Goddard, said: "The last 12 months have been hard for many sectors across the country, without doubt, but it's clear that more and more businesses are regaining confidence in regard to expected activity and employment levels.

"What's difficult to see is that many businesses across Scotland are having to downgrade their workspace requirement whilst essentially acknowledging that their will have a negative impact on performance. Of course, some will have had a depressed or uncertain income over a year now, so who can blame them; they're simply doing what they need to do to survive.

"I think over the coming months we're going to see a surge in more compact but higher quality workspaces, with both landlords and occupiers thinking hard about how they can not only drive productivity, but create places that promote health, wellbeing and sustainability."

Note
This article was written by James Black, Ben Cooper and Mairi Spowage at the Fraser of Allender Institute.
https://fraserofallander.org/new-survey-increased-optimism-shared-amongst-scottish-businesses/