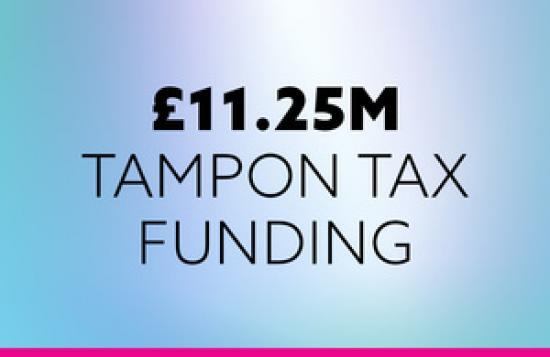 Charities can now apply for funding to support projects helping thousands of women and girls across the UK, as part of the latest and final round of the Government's Tampon Tax Fund.

£11.25 million to be made available for charities working with disadvantaged women and girls.

Threshold for applications reduced to £350,000.

A pot of £11.25 million has been made available to charitable organisations to bid for, with priority given to those working to end violence against women and girls, as well as organisations that support a network of charities.

For this round of funding, the grant threshold has been reduced from £1 million to £350,000. This means that more organisations will be able to apply, increasing accessibility to organisations that support this vital work.

The Tampon Tax Fund was introduced in response to VAT being imposed on sanitary products by the European Union, and following this round will have provided more than £90 million of funding supporting women and girls charities.

As per the government's manifesto commitment, the Chancellor announced at the Budget in March 2020 that the tax would end on 1 January 2021 following the UK's exit from the EU, as part of a wider government strategy to make sanitary products affordable and available for all women.

Minister for Civil Society and Youth, Baroness Barran, said:The Tampon Tax Fund was launched in 2015, and since then has reached disadvantaged women and girls across all four nations, tackling an extremely wide and diverse range of issues.

The support provided through this final round will ensure specialist charities who receive grants can support women and girls in need, and help to become more sustainable and plan for the future.

We remain as committed as ever to ending violence against women and girls which is why this category is a priority for this round of funding, and we will continue to tackle the issue as a priority.

The government is particularly encouraging applications from specialist women’s networks whose projects include making onward grants to other women’s’ charitable organisations. This will make use of the expertise in the charitable sector, ensure this round of funding reaches as many disadvantaged women and girls as possible and help the country to build back better following the pandemic.

Grants may be for 12 or 18-month projects, and all activities must be concluded and funds spent by 31 March 2023.

The deadline for applications is Sunday 4 July 2021.

The lower grant threshold for this final round of applications will ensure that even more charities can access funding. I’d strongly urge Scottish charities working to support disadvantaged women and girls to apply.