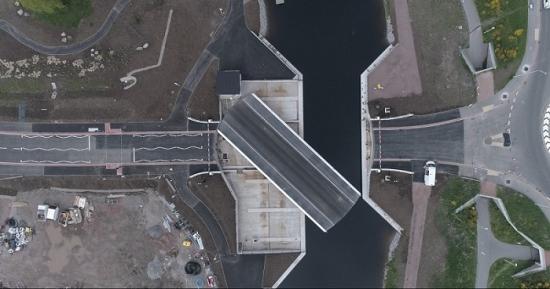 A vital stage of the city's ambitious West Link project swung into place on 31st May 2021 with the opening of the new Torvean Bridge in Inverness.

The swing bridge opening represents a core element of the transformational West Link Project which is now drawing towards its conclusion.

Cllr Trish Robertson, Chair of the Economy and Infrastructure Committee, was the first person to cross the new swing bridge last week, ahead of today's official opening to the public.

The project has seen the completion of the link from the Southern Distributor Road at Dores Road to the A82 including crossing the River Ness on the new Holm Mills Bridge; new sports facilities at Canal Parks including synthetic pitch and clubhouse; and a relocated golf course.

A core element of Stage 2 was the inclusion of the second swing bridge over the Caledonian Canal to the south of the existing Tomnahurich swing bridge. This tandem bridge arrangement will allow the free flow of vehicle traffic on the A82 to continue, while boats pass through one or other of the open swing bridges.

There will normally be two routes available for vehicles to cross the canal and vehicles will be diverted over one or other bridge, only while the other is open to allow boat passage.

Chair of the Economy and Infrastructure Committee at Highland Council, Cllr Trish Robertson, said: "This is a landmark day for the city of Inverness which sees the new swing bridge come into operation. The West Link project will deliver a greatly improved infrastructure to support the future development, growth and prosperity of Inverness and the Highlands.

"Despite the halt in works caused by the COVID-19 pandemic and lockdowns we are delighted to have been able to deliver this project with such minimal delay and on budget."

She added: "The project also forms part of the Inverness and Highland City-Region Deal which is aimed at stimulating sustainable, regional economic growth.

“The West Link will allow the peripheral growth of Inverness and reduce traffic congestion in Inverness City centre. It will also reduce existing canal bridge delays and waiting times. The associated developments enabled by the West Link will expand the active travel network removing bottlenecks and barriers to cycling and walking and will release land for development identified in the local plan."

The Highland Council also acknowledged the enthusiastic public support for the project and would like to thank the Community Liaison Group for its valuable input during the consultation phases.

Chair of the Community Liaison Group, former Cllr Graham Ross said: “The group's input has been extremely valuable throughout the whole project and has ensured that there has been excellent communication between the Council, the contractors and the community."

Stage 1 of the West Link Project was completed in December 2017 and Stage 2 began in 2018. This phase of the project was originally planned for completion by the end of 2020, however the site was forced to close due to COVID-19 restrictions for a number of months. This inevitably meant a delay in completion, with the project then projected to finish near the end of May 2021.

The benefits of the West Link project include:

Reduced congestion at key junctions for both public transport and private cars within Inverness City Centre.
Encouragement of cycling and walking within the city centre by reducing congestion thereby making for a safer and more pleasant environment.
Improved journey times for movements to/from the west of the City.
Torvean Bridge is opened to canal traffic. It will also improve response times for emergency vehicles and bus journey time reliability.
Enable the development of significant areas for housing and other economic development at Ness-side and Torvean. To date 1,500 houses have been enabled.
Enable the development of a City Gateway at the Caledonian Canal entrance to the city, working with partners such as Scottish Canals.
Provides a new facility at Canal Parks, managed by Highlife Highland, for Highland Rugby Club and the wider community.
Provides a reconfiguration of Torvean Golf Course, with enhanced facilities, golf development potential and a centralised location
A short video (below) was created to show the new Inverness West Link and Torvean Swing Bridge from the air.