Office of Budget Responsibility - An Initial Response To The Prime Minister's Announcement On Health, Social Care And National Insurance 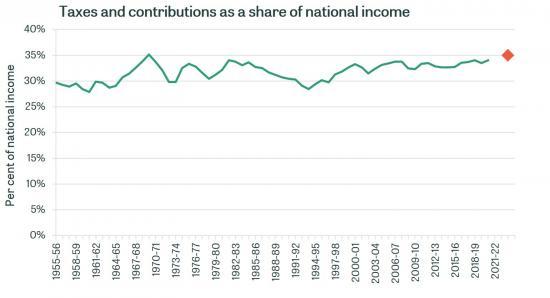 "Today's announcements constituted a Budget in all but name. £14 billion of tax raised through a supposedly new tax, equivalent increases in spending on health and social care, and an announcement of spending totals for the next three years certainly constitute a major fiscal event. After a quarter century of dithering we may finally have settled on a solution for improving the structure of social care funding, as well as an increase in the amount spent publicly on it. We have a funding package for the NHS which should be enough to prevent post pandemic waiting lists from spiralling. For "unprotected" departments, the announced spending totals might be enough to avoid cuts, though this is far from certain and depends on the extent of future virus-related spending.

A levy of 1.25% on employee earnings and on employer wage costs (so a 2.5% overall increase in the tax rate on earnings), will raise £14 billion a year. The extension of this levy to those over state pension age and to dividends is welcome, but this remains a tax which will be overwhelmingly borne by workers with very little coming from pensioners. This continues a trend seen over many decades of the burden of tax being shifted towards earnings. The creation of an entirely new tax will mean yet more quite unnecessary complexity.

Both spending and tax will ratchet upwards over the next few years. Taxes will reach their highest sustained level in the UK. This was always going to be an inevitable consequence of ever growing demands on health and social care, and would have happened eventually irrespective of the pandemic.

It is disappointing that the government did not find a better package of tax measures to fund these spending increases. A simple increase in income tax would have been preferable. But overall much needed reforms to social care are being introduced and unavoidable pressures on the NHS are being funded through a broad based and broadly progressive tax increase. That is better than doing nothing."

NHS funding
Today's announcements include an additional £11.2 billion for the Department of Health and Social Care in 2022−23, and £9.0 billion in 2023−24. Of that, around £1.8 billion each year is earmarked for social care (discussed below).

Our best estimate, based on detailed analysis to be published later this week, is that this could be enough to meet the pandemic-related pressures on the NHS. If the NHS can in fact boost capacity to 10% above the level assumed in the long-term plan, as promised today, we estimate that this should be sufficient to return the waiting list to pre-Covid levels within three or four years. But even with extra funding, a boost to capacity on that scale will still be highly challenging, given long-standing staffing shortages and the potential need for ongoing infection control measures.

The settlement also includes a stated £5.6 billion of ‘additional' funding in 2024−25, though this assumes that NHS funding would otherwise have stayed flat in real terms. The top line is that between 2018−19 and 2024−25, the NHS England budget will have increased by the equivalent of 3.9% per year in real-terms: slightly above the long-run average of 3.6% growth in UK health spending, and well above the 1.2% per year seen between 2009−10 and 2018−19, but below the average 6.0% seen under the Blair and Brown governments.

Max Warner, a Research Economist at the IFS, said:"Today's announcement represents a substantial increase in funding for the NHS − though in the face of enormous pressures. This additional funding could be enough to meet the Covid-induced pressures on the NHS in the near-term, and to clear the elective backlog over the parliament. This depends crucially, though, on the ability of the NHS to increase treatment volumes in the face of staffing and other capacity constraints, and on the future course of the pandemic."

Today's announcements will mean higher tax and higher spending, to the tune of around £14 billion per year. The pandemic is expected to result in a permanent increase in the size of the state - as happened after WW1 and WW2, but not after the global financial crisis. Coming out of the pandemic, government spending appears set to come out of this crisis at 42.4% of national income, higher than it was prior to the pandemic.

Following a rise in income tax of £8 billion and in corporation tax of £17 billion in the March Budget - the biggest tax rising Budget since Spring 1993 - the Chancellor has announced a further tax rise of £14 billion or 0.6% of national income, which if delivered will raise the tax burden in the UK to the highest-ever sustained level.