Why Do Wealthy Parents Have Wealthy Children? 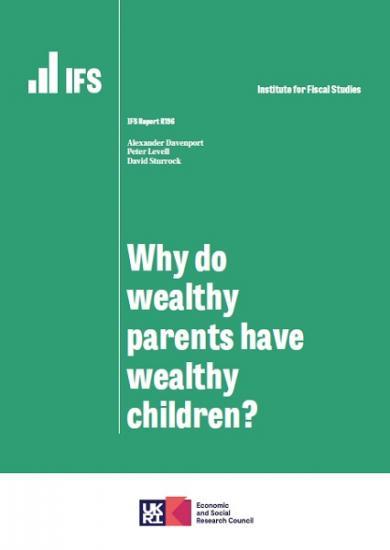 The Institute for Fiscal Studies article looks at the reasons why the children of wealthy parents get richer than children from poorer families.

---------------------
Why do the children of wealthy parents accumulate more wealth than children from poorer backgrounds? Does parental wealth have a role in determining young people's earnings, saving choices, returns to wealth and access to homeownership? How much wealth do parents give directly to their children? What other channels are involved in the persistence of wealth from one generation to the next?.

Key findings
Those with wealthy parents tend to be wealthier themselves. When they were in their 30s, those born in the 1970s and 1980s whose parents were in the wealthiest fifth of parents of the same age had average net wealth (excluding pension wealth) of £107,000, around six times more than the £18,000 held by those with parents in the poorest fifth.

The persistence of wealth across generations in the UK is comparable to that in the US but greater than that in Scandinavian countries. 10% higher parental wealth is associated with 3.7% higher child wealth, a similar level of intergenerational persistence to that seen in the US and higher than that in Denmark, Norway and Sweden.

Around half of the persistence in wealth across generations can be accounted for by the intergenerational persistence of education and earnings. This suggests an important role for the transmission of ‘human capital', and other drivers of earnings, in transmitting wealth inequalities across generations, but that other factors such as saving rates or direct wealth transfers are significant too.

Those with wealthier parents save larger portions of their earnings. While the average saving rate was 3% of earnings for those with parents in the poorest fifth, it was 12% for those with parents in the wealthiest fifth. These differences are not explained by the differences in these children’s earnings or education or by children’s saving rates being related to their parents’ saving rates. One possible explanation for this is that the children of wealthier parents receive more transfers and capital income, and save some of this.

Those with wealthy parents hold a larger share of their wealth as higher-return investments such as stocks and shares. However, given the small amount of wealth held in this form, this cannot be a major driver of the intergenerational persistence of wealth.

Those with wealthy and poor parents were equally likely to have a partner, but those with wealthier parents tend to have higher-earning partners. However, this difference is largely accounted for by differences in child’s own earnings, and does not appear to have an independent role in driving intergenerational persistence of wealth.