Levelling Up & Community Renewal: A Focus On The Highland Council Area 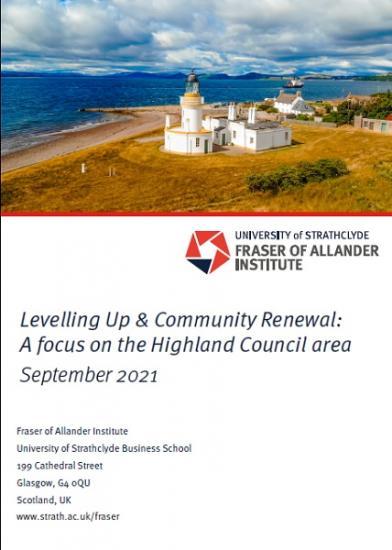 This report by the Fraser of Allender Institute was commissioned by Highland council. It was first published 8 September 2021.

This report examines the indicators used for prioritisation through the Levelling Up Fund, focussing on Highland Council area.

Our findings are as follows.

The indicators used to demonstrate the need for economic recovery and growth miss crucial economic factors that will impact considerably on Highland's economic resilience. Some of these measures, such as working age population density, or the outlook for the population, are readily available and could be considered for inclusion in any future assessment of need.

The differential impact that COVID-19 is likely to have on certain parts of the country should also be considered in decisions on investment. Our modelling shows that Highland is likely to be one of the areas hardest hit by the pandemic, given its sectoral make up.
Given the focus on investment in transport connectivity in the Levelling Up prospectus, it is critical that the relative need for transport investment is captured for Scotland. Highland Council, and other remote and rural areas, would be given much higher priority if this was done.

The need for economic regeneration is currently captured fairly crudely. Many of the indicators discussed in the first section, particularly around demography, are relevant for signalling the need for investment to change to projected outcomes.

The geography of Highland and its 12 separate labour markets make it much more tricky to make the case that different projects within the local authority area impact on one another, so this should be considered in the packages of proposals put forward.

Notes from the report
We can see that unemployment in the Caithness and Sutherland and Ross and Cromarty region is above the average of Scottish high priority areas and GVA per hour in Lochaber, Skye & Lochalsh,
Arran & Cumbrae and Argyll & Bute is below this average.

Chart 2 shows the projected population change between 2016 and 2041 for Scotland, Highlands Council and the different areas that make up the council. First, note that while Scotland is projected
to grow its population by about 3%, the population of Highland Council is projected to shrink by about 0.6% by 2041.

We can see from this analysis that Highland is likely to have been one of the hardest hit areas through the pandemic, due mainly to the economy's reliance on social spending sectors related to tourism.

Given its size, Highland local authority has the largest road network in Scotland to manage, with 6,766km of road under its responsibility, which is 13% of Scotland's local authority network.

Of course, connectivity is no longer just about physical transport connectivity. Data from Ofcom, as shown in Diagram 2 below, demonstrates that there is investment required in the Highland Council area, with particularly numerous parts of Caithness & Sutherland and Skye and Lochaber in the worst 10% in the UK for connectivity.