The Coronavirus Job Retention Scheme - How Successful Has The Furlough Scheme Been And What Should Happen Next? 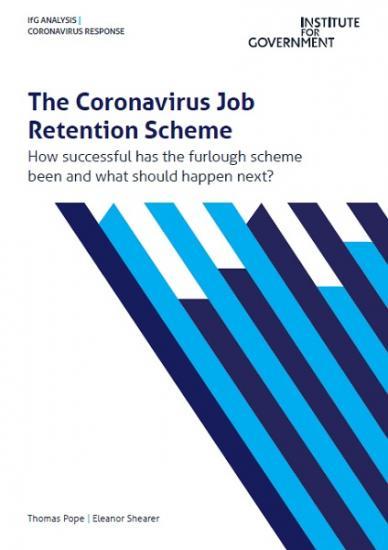 The institute for Government research paper takes the view that the Furlough Scheme should be finished as planned at the end of September 2021.

The furlough scheme risks providing poor value for money and should end as planned at the end of September - even if it is still supporting many jobs.

This report, based on the final official data before the scheme is due to close, assesses the most radical economic policy the UK government enacted in response to coronavirus - and supports the government's decision to bring it to a close later this month. It recommends that any government extension of the furlough support scheme be restricted for sectors still badly affected by restrictions, like aviation.

The scheme has cost £69 billion and counting, but has protected around 8 million people from unemployment. By keeping employees linked to their employers, it also helped the UK labour market recover more quickly in 2021 than other countries - like the US - which chose to introduce larger unemployment benefits rather than protect jobs. US employment is still 4% below pre-Covid levels and employers are reporting problems hiring. UK employment is only 1% down.

There are around 1.5 million people still on furlough, but this is not a good reason to extend the scheme. Under half of jobs still on the scheme are in sectors that have been directly affected by coronavirus – like hospitality and aviation – and with restrictions now lifted the scheme is probably supporting many ‘unviable' jobs that do not have a long-term future.

With the labour market recovering and job opportunities increasing, it is better to end the scheme and allow workers to find jobs with better prospects.

The IfG paper finds that:

Almost 9 million employees were furloughed and would have been at risk of losing their job without furlough, in May 2020. There were almost 1 million fewer jobs in November 2020 than March 2020, but by July 2021 employee numbers had almost recovered to pre-Covid levels.

There are still over 1.5 million jobs being supported by the scheme, 800,000 of which are fully furloughed.
Almost half of jobs supported are now part-furloughed, meaning the employee is working some of the time. And jobs are more evenly spread across sectors, including those not directly affected by Covid like manufacturing.

The labour market has recovered strongly. Job vacancies are now higher than pre-crisis levels in most sectors even as people remain furloughed in those sectors. Economic growth relies on ‘re-allocation' of workers from failing businesses to thriving ones and the furlough scheme could now be slowing this down.