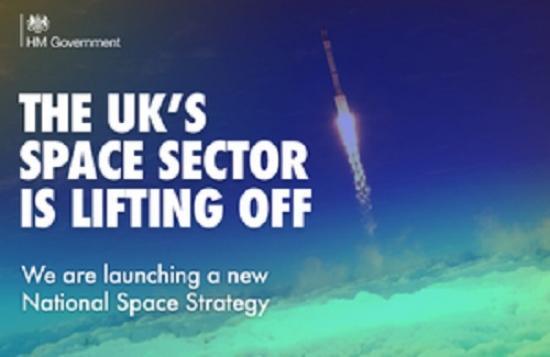 National Space Strategy sets out long-term plans to strengthen the UK's status as a world-class space nation
New vision will help grow UK's multibillion-pound space industry, boost private investment and capitalise on UK strengths such as satellite manufacturing
Brings together UK government civil and defence space activities to protect UK interests at home and abroad
New plans to strengthen the UK as a world class space nation by firing up its multibillion-pound space industry have been set out in a National Space Strategy launched today.

From connecting people with their friends and family and monitoring climate to helping farmers to manage their crops, space plays a pivotal role in our daily lives, and is a vital part of the UK economy, worth over £16 billion per year.

Today’s National Space Strategy sets out the government’s long-term vision for how the UK can establish itself as one of the most attractive and innovative space economies in the world. It will empower British space businesses to innovate and grow by unlocking private finance, while positioning the UK at the forefront of international space research - whether that’s by supporting the first British spaceport satellite launch due in 2022, or leading international space missions that help tackle global challenges such as climate change.

The Strategy brings together the UK government’s civil and defence space activities to ensure an integrated approach to combating hostile forces and emerging international threats such as cyber-attacks and anti-satellite missiles, while protecting UK interests at home and abroad.

It also sets out how the government will build on the UK’s strengths in space including satellite manufacturing and communications, while working with British companies at the cutting edge of the latest advances in space technologies. The Strategy outlines how the UK can establish global leadership in high-growth areas, such as satellite broadband operations, building on the government’s recent investment in OneWeb, while also focusing on new and emerging markets like in-orbit servicing and space debris removal.

As we enter an exciting new space age, we have bold ambitions for the UK to be at the vanguard of this industry in our role as a science superpower - whether it’s launching the first satellite from British soil, or leading major international space missions to help combat climate change.

Today’s National Space Strategy sets out our vision for ensuring that our thriving space sector lifts off for the long term. It will put rocket boosters under the UK’s most innovative space businesses, ensuring they can unlock private capital and benefit our home-grown space expertise.

Above all, by integrating our commercial and military space activities, we will use space to protect British interests abroad and on home soil, establishing the UK as one of the most attractive and innovative space economies in the world.

The Strategy has 4 cross-cutting pillars where government will take bold action to achieve its goals:

unlocking growth in the UK space sector - supporting UK businesses, researchers, and innovators to grow the space sector and level up our economy
collaborating internationally with our partners and allies - demonstrating global leadership, and becoming an international partner of choice in space activities
growing the UK as a science and technology superpower - continuing to collaborate in high profile space missions and backing space technologies to tackle global challenges such as climate change
developing resilient space capabilities and services - ensuring our critical national infrastructure can rely on a wide range of resilient space technologies and delivering the UK Defence Space Portfolio to strengthen UK security at home and overseas.
The UK already boasts a thriving space sector employing over 45,000 people in highly skilled jobs - from space scientists and researchers to engineers and satellite manufacturers. The National Space Strategy looks to harness these strengths and support British companies to seize future opportunities, with the global space economy projected to grow from an estimated £270 billion in 2019 to £490 billion by 2030.

Ensuring the UK keeps pace with our competitors and adversaries as space becomes more competitive, congested and contested, the Strategy commits to the delivery of the UK’s first Defence Space Portfolio. This will see the government investing an additional £1.4 billion in developing new capabilities over and above the £5 billion already committed to enhance the military’s satellite communications.

The ability to operate in space is fundamental to the success of our Armed Forces but also in maintaining civilian, commercial and economic activity. We launched UK Space Command this year for this very purpose.

Collaboration with academic and industry partners ensures we progress research and development needed to stay at the forefront of pioneering technology and ahead of our adversaries.

The new National Space Strategy builds on our commitment to spend more than £6 billion over the next 10 years to enhance our space capabilities, support vital skills and expertise whilst strengthening the UK’s security at home and overseas.

Also published today is the National Severe Space Weather Preparedness Strategy, which sets out a 5-year vision for boosting UK resilience to the risk of severe space weather events.

Severe space weather refers to the variable conditions on the sun and in space that can influence the performance of technology and national infrastructure that we use on Earth - from power grid outages to disruption of satellite-navigation systems that we use.

With the UK set to become the first country to launch a rocket into orbit from Europe in 2022, the National Space Strategy cements the UK’s ambition to become the leading provider of commercial small satellite launches in Europe by 2030. It will prioritise the development of spaceports across the country, from Cornwall to the Shetland Islands, to capitalise on the UK’s competitive strength in small satellite manufacturing.

This will be supported by world class UK space industry regulations which were passed in Parliament earlier this year, and which will help attract further international investment to develop commercial spaceflight technologies and make UK spaceflight a reality.

To provide UK space businesses with clear direction so that they can reap these rewards, the Strategy features a Ten Point Plan, identifying the highest impact opportunities where resources will be targeted. Priority areas include developing and levelling up the UK’s world class space clusters, from Durham to Newport, using space technology to improve public services and our transport system, as well as investing in the UK’s most innovative space products, building on the government’s recent Innovation Strategy.

The National Space Strategy also prioritises international collaboration, building on the success of the recent UK – Australia ‘Space bridge’, and seeking to establish new trade partnerships with global space allies. It reiterates the important role the UK will continue to play as part of the European Space Agency, while also leading international efforts at the UN to promote space safety, security and sustainability – holding other nations to account for their actions.

It commits to continued collaboration on high profile space missions that increase our understanding of the Universe – from monitoring space weather events such as solar flares to returning samples from Mars to the Earth. In addition, it reinforces the importance of using pioneering space research and technologies to tackle global challenges such as climate change, including working with the European Space Agency on the UK-led TRUTHS mission to deliver a 10-fold improvement in accuracy of climate data.

Alongside today’s Space Strategy, a study is being published on Space Based Solar Power (SBSP), looking at the feasibility of using satellites in geo-stationary orbit with large-scale photovoltaic panels to capture solar energy that can be beamed using radio technology to a fixed point on the earth.

The study supports a case for developing SBSP and future funding will be made available from the £1 billion Net Zero Innovation Portfolio to support development of relevant energy technologies that also have broader terrestrial applications and could still contribute to the UK’s climate change commitments, whether SBSP is deployed or not.