How Would An Independent Scotland Borrow? 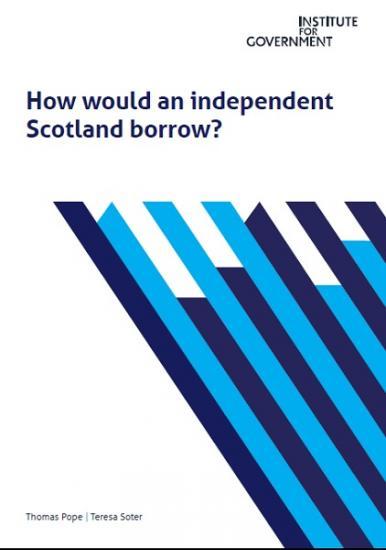 Any currency choice for a newly independent Scotland would require its government to bring borrowing down to a sustainable level and commit to low and stable inflation.

Whatever currency arrangement it chose, Scotland's ability to borrow would be restricted by what international investors were willing to lend. The implicit Scottish deficit was over 8% of GDP before coronavirus. No advanced economy - especially no small, advanced economy - has consistently borrowed anything like that much in normal times. A sustainable medium-term deficit would be closer to 3%. But this gap cannot be closed by spending less on defence or - at least initially – through higher growth, so some tax increases or spending cuts would be necessary.

Even a deficit of around 3% per year would see Scotland pay higher interest on its debt than the UK does. In the current low interest rate environment, the IfG estimates that Scotland's premium over UK rates would be 0.4 to 0.9 percentage points. Initially, this borrowing premium would reflect a lack of a track record of repaying debts. In the medium term, it would mainly be because all smaller countries tend to pay more to borrow than large ones, and because Scotland's tax base would be more volatile than the UK’s due to its greater reliance on oil and financial services. Scotland would therefore need to spend more on debt interest, requiring lower spending elsewhere or higher taxes.

Higher borrowing costs and concerns about currency stability could be minimised – though not eliminated – by an independent Scotland putting in place strong, independent institutions (including a new monetary authority and expanding the role of the Scottish Fiscal Commission) and demonstrating a commitment to low and stable inflation and to sustainable fiscal policy.