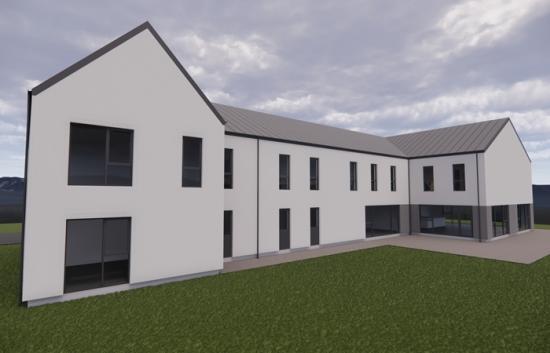 The project, which is led by Fair Isle Bird Observatory Trust (FIBOT), will create seven new green jobs, help to sustain the island's population and meet the community's aspirations to become carbon neutral by 2040.

The development aims to create a sustainable and energy efficient building, using power from the island’s community-owned renewable energy grid as well as from the building’s own solar panels.

The observatory was first established in 1948 and has played a vital role in sustaining the population of Fair Isle, which is located roughly halfway between Orkney and Shetland and currently has a population of around 50.

As well as being a popular visitor attraction for bird watchers, the observatory has had an important research role, gathering bird census and migration data for the past 70 years.

The new premises will include 29 high quality guest rooms for visitors and staff with social space and facilities for research. This will occupy the site of the most recent building, which was completed in 2011 but destroyed in a disastrous fire in March 2019.

Designed by Colin Armstrong Architects, based in Inverness, the innovative modular building will largely be constructed off-site, with modules being shipped to Fair Isle for assembly and completion works.

Subject to planning consent, it is hoped that construction on the island could get under way in summer 2022 and the new observatory be ready to welcome its first visitors in spring 2023.

Confirmation of the funding package means one of the UK’s most remote communities can look forward to a promising future as a global eco-tourism destination that plays a crucial role in the social and economic life on the island.

Fair Isle is the UK’s most remote inhabited island, with a current population of around 50.

Katrina Wiseman, interim area manager for HIE’s Shetland area team, said:"This project is of vital importance to Fair Isle bringing back a key income generating facility, providing employment, hosting visitors to the Island, and providing world renowned research. The facility provides significant spin-off benefits for all Fair Isle businesses and the community. It will support the viability and sustainability of one of the most remote islands in the UK and at the same contribute to the net zero aims of those living on the Island.

“The new observatory will be a prime example of carbon friendly, sustainable visitor accommodation, which along with the new green jobs, will have significant positive environmental impacts. The important research work carried out by FIBOT will expand, enabling marine research, in collaboration with the community, to help tackle the climate emergency.

“The project also addresses other challenges for Fair Isle such as keeping and attracting population, and the need for tourism to be more sustainable. We are very much looking forward to seeing the Observatory open once again."

Rural Affairs and Islands Secretary, Mairi Gougeon said:“The observatory has been an integral part of the community on Fair Isle for many years, and it’s absolutely fantastic that this funding has been secured to help the rebuild. The new building will support the economy of the island by creating jobs and providing a great base for visitors and researchers as well as contributing to our ambitions for carbon neutral islands as part of a fairer, greener Scotland.”

The observatory has close links to other organisations such as the National Trust for Scotland which owns the remainder of the island.

Douglas Barr, Chair of FIBOT said:“We are extremely grateful to HIE and the Scottish Government for their funding package which will enable us to rebuild the Observatory next year. This will allow us to continue and develop further our world class data and research and for us to maintain our important role in both the tourist and wider Fair Isle economy.”

Chair of the Fair Isle Community , Kathy Coull, said:"It is welcome news in Fair Isle that the Bird Observatory Trust has now reached its funding target with the help of HIE funds from the Scottish Government. The rebuild can proceed and help secure our economic, social and cultural future. It signals a great step on our island’s road to recovery."

The £2,348,590 support package includes £650,000 from HIE's budget and almost £1.7m of funding from the Scottish Government with £1.3m coming from Scottish Islands Critical Infrastructure Fund; £198,590 net zero funding to help the region's tourism industry be greener and more sustainable and £200,000 Green Jobs funding for creating jobs that benefit the environment and helps to conserve natural resources. The latter two Scottish Government funds are being distributed by HIE on behalf of the Scottish Government.

The £7.4m project is also being supported by FIBOT’s own funds as well as an international crowdfunding appeal to raise £650,000 for the rebuild. Shetland Islands Council (Crown Estates Coastal Communities Fund) and Garfield Weston Foundation have also contributed to the project.