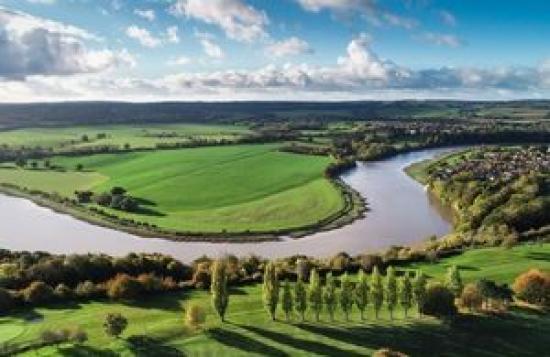 With less than three weeks to COP26, Environment Agency warns that adaptation - becoming resilient to the effects of climate change - is just as vital as mitigation.

The climate emergency can only be successfully tackled through greater focus on adapting to the inevitable climate impacts that we are already seeing, the Environment Agency has warned as it urged world leaders to step up to that challenge at COP26.

In a report to Government, the agency has warned of more extreme weather leading to increased flooding and drought, sea level rises of up to 78cm by the 2080s, and public water supplies needing more than 3.4 billion extra litres of water per day by 2050. It has urged governments, businesses and society to embrace and invest in adaptation, rather than living with the costs of inaction.

With COP26 less than three weeks away, it has welcomed the UK Government's focus on adaptation as well as mitigation, and the fact that climate adaptation is one of the Summit’s four key goals, but urged that more action is needed at a global level to protect the billions of lives and livelihoods that are at risk.

Emma Howard Boyd, Chair of the Environment Agency, said:The climate crisis is global, but its impacts are in your village, your shop, your home. Adaptation action needs to be integral to government, businesses and communities too and people will soon question why it isn’t – especially when it is much cheaper to invest early in climate resilience than to live with the costs of inaction.

While mitigation might save the planet, it is adaptation, preparing for climate shocks, that will save millions of lives. Choosing one over the other on the basis of a simple either/or calculation is like telling a bird it only needs one wing to fly.

With that in mind, it is deeply worrying that adaptation is in danger of being grievously undercooked at COP26. Not by the UK Government, but by the world at large.

Significant climate impacts are inevitable. We can successfully tackle the climate emergency if we do the right things, but we are running out of time to implement effective adaptation measures. Our thinking must change faster than the climate.

Some 200 people died in this summer’s flooding in Germany. That will happen in this country sooner or later, however high we build our flood defences, unless we also make the places where we live, work and travel resilient to the effects of the more violent weather the climate emergency is bringing. It is adapt or die. With the right approach we can be safer and more prosperous. So let’s prepare, act and survive.

The message comes in the Environment Agency’s third adaptation report, submitted to the government under the Climate Change Act.

Even with a 2°C temperature rise compared to pre-industrial levels, key projections within the report include:

River flows will be more extreme. Peak flows are expected to be up to 27% higher in the 2050s, while in the summer months river flows could be 82% lower by as soon as 2050.

Public water supplies are expected to require more than 3.4 billion extra litres of water per day if no action is taken before 2050.
Baroness Brown of Cambridge, Chair of the CCC’s Adaptation Committee, said:

We’re pleased to see the Environment Agency publishing its latest climate change adaptation plan. This road map will be vital to ensuring our natural and built environments are well adapted to the significant changes in our climate taking place today, with more to come. We urge all Government agencies, authorities, regulators and businesses big and small to get their adaptation plans together before the deadline on 31 December. We look forward to assessing the EA’s plan in early 2022 as part of our independent appraisal for Government of similar plans from across the public and private sectors.

The report also sets out five climate "reality checks" to make the case for urgent action on adaptation:

The Environment Agency alone cannot protect everyone from increasing flood and coastal risks: rising sea levels and extreme winter rainfall will mean it will not be technically, socially, and economically viable to protect every community. Instead, alongside constructing and maintaining defences, we must help communities learn to live with risk, minimise damage, and return to normal life quickly.

Climate change makes it harder to ensure clean and plentiful water: existing issues with water stress will be exacerbated by climate change bringing altered temperature and rainfall patterns. Measures to tackle these pressures are underway, but a strategic approach to water management and faster progress on improvements are needed.

Environmental regulation is not yet ready for a changing climate: climate change is increasing the impact of environmental incidents, for example lower river levels means pollutants diffuse slower and have a greater impact. It is vital that environmental policy and legislation keeps pace with the escalating challenge to allow us and other regulators to protect the environment.

Ecosystems cannot adapt as fast as the climate is changing: industrialisation and urbanisation have left the UK as one of the most nature-depleted countries in the world, and climate change means wildlife in England will continue to be altered. We must recognise importance of natural ecosystems in supporting life (including our own) in our health and wellbeing. Nature must be the essential foundation of development, rather than being seen as an impediment.

The report highlights how the Environment Agency is working with government, businesses and communities to prepare for the impacts of climate change, including delivering a record £5.2 billion programme of new flood and coastal defences over the next six years.

While the risks are serious, they can be addressed by early action, and the report also sets out how the Environment Agency is meeting those challenges.

Working with government, businesses and communities to implement the Flood and Coastal Erosion Risk Management (FCERM) Strategy and our vision to create a nation ready for and resilient to flooding and coastal change up to 2100.

Working with water companies and Ofwat on the National Framework for Water Resources, which sets out how we will address future challenges to water supply.
Helping to deliver the £10 million Natural Environment Readiness Fund, helping to support projects in attracting private sector finance into investment in the natural environment.

Focusing on nature based approaches, restoring and creating peatlands, wetland and other habitats to create climate-resilient habitats for wildlife, reduce flood risk, improve water quality and improve access to greenspace for people

Using our role as a regulator to help businesses understand and reduce their climate impact and prepare for the future.

The UK Government is committed to adaptation as well as mitigation. Two of the government’s main goals COP26 are:

Secure global net zero by mid-century and keep 1.5 degrees within reach. Countries are being asked to come forward with ambitious 2030 emissions reductions targets that align with reaching net zero by the middle of the century. To deliver on these stretching targets, countries will need to accelerate the phase-out of coal, curtail deforestation, speed up the switch to electric vehicles, encourage investment in renewables.

Adapt to protect communities and natural habitats. The climate is already changing and it will continue to change even as we reduce emissions, with devastating effects. At COP26 we need to work together to enable and encourage countries affected by climate change to: protect and restore ecosystems, build defences, warning systems and resilient infrastructure and agriculture to avoid loss of homes, livelihoods and even lives