Surging Energy Prices May Not Ease Until Next Year 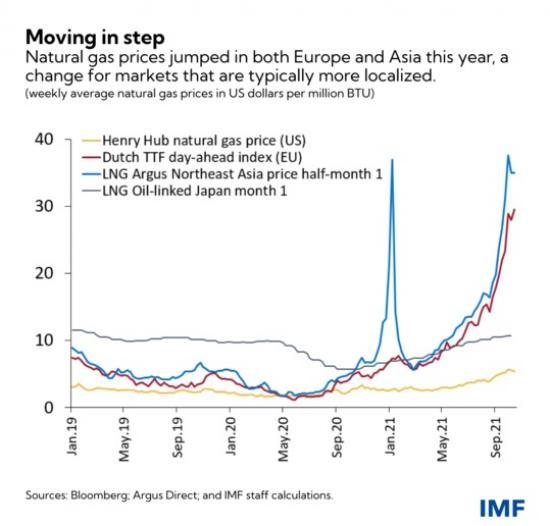 An unprecedented combination of factors is roiling world energy markets, rekindling the memories of the 1970s energy crisis and complicating an already uncertain outlook for inflation and the global economy.

Spot prices for natural gas have more than quadrupled to record levels in Europe and Asia, and the persistence and global dimension of these price spikes are unprecedented. Typically, such moves are seasonal and localized. Asian prices, for example, saw a similar jump last year but those didn't spill over with an associated similar rise in Europe.

Our expectation is that these prices will revert to more normal levels early next year when heating demand ebbs and supplies adjust. However, if prices stay high as they have been, this could begin to be a drag on global growth.

Meanwhile, ripple effects are being felt in coal and oil markets. Brent crude oil prices, the global benchmark, recently reached a seven-year high above $85 per barrel, as more buyers sought alternatives for heating and power generation amid already tight supplies. Coal, the nearest substitute, is in high demand as power plants turn to it more. This has pushed prices to the highest level since 2001, driving a rise in European carbon emission permit costs.

Given this backdrop, it helps to look back to the start of the pandemic, when restrictions halted many activities across the global economy. This caused a collapse of energy consumption, leading energy companies to slash investment. However, consumption of natural gas rebounded fast—driven by industrial production, which accounts for about 20 percent of final natural gas consumption—boosting demand at a time when supplies were relatively low.

Energy supply, in fact, has reacted slowly to price signals due to labor shortages, maintenance backlogs, longer lead times for new projects, and lackluster interest from investors in fossil fuel energy companies. Natural gas production in the United States, for example, remains below precrisis levels. Production in the Netherlands and Norway is also down. And Europe's biggest supplier, Russia, has recently slowed its shipments to the continent.

Weather has also exacerbated gas market imbalances. The Northern Hemisphere's severe winter cold and summer heat boosted heating and cooling demand. Meanwhile, renewable power generation has been reduced in the United States and Brazil by droughts, which curbed hydropower output as reservoirs ran low, and in Northern Europe by below-average wind generation this summer and fall.

While coal can help offset natural gas shortages, some of those supplies are also disrupted. Logistical and weather-related factors have crippled production from Australia to South Africa, while coal output in China, the world's largest producer and consumer, has fallen amid emissions goals that disincentivize coal use and production in favor of renewables or gas.

In fact, Chinese coal stockpiles are at record lows, which increases the threat of winter fuel supply shortfalls for power plants. And in Europe, natural gas storage is below average ahead of winter, adding risk of more price increases as utilities compete for scarce resources before the arrival of cold weather.

Coal and natural gas prices tend to have less of an effect on consumer prices than oil because household electricity and natural gas bills are often regulated, and prices are more rigid. Even so, in the industrial sector, higher natural gas prices are confronting producers that rely on the fuel to make chemicals or fertilizers. These dynamics are particularly concerning as they are affecting already uncertain inflation prospects amid supply chain disruptions, rising food prices, and firming demand.

Should energy prices remain at current levels, the value of global fossil fuel production as a share of gross domestic product this year would rise from 4.1 percent (estimated in our July projection) to 4.7 percent. Next year, the share could be as high as 4.8 percent, up from a projected 3.75 percent in July. Assuming half of this increase in costs for oil, gas, and coal is due to reduced supply, this would represent a 0.3 percentage point reduction in global economic growth this year and about 0.5 percentage point next year.

Energy prices to normalize next year

While supply disruptions and price pressures pose unprecedented challenges for a world already grappling with an uneven pandemic recovery, the silver lining for policymakers is that the situation doesn't compare to the early 1970s energy shock.

Back then, oil prices quadrupled, directly hitting household and business purchasing power and, eventually, causing a global recession. Nearly a half century later, given the less dominant role that coal and natural gas plays in the world's economy, energy prices would need to rise much more significantly to cause such a dramatic shock.

Moreover, we expect natural gas prices to normalize by the second quarter as the end of winter in Europe and Asia eases seasonal pressures, as futures markets also indicate. Coal and crude oil prices are also likely to decline. However, uncertainty remains high and small demand shocks could trigger fresh price spikes.

That means central banks should look through price pressures from transitory energy supply shocks, but also be ready to act sooner—especially those with weaker monetary frameworks—if concrete risks of inflation expectations de-anchoring do materialize.

Governments should act to prevent power outages in the face of utilities curtailing generation if it becomes unprofitable. Blackouts, particularly in China, could dent chemical, steel, and manufacturing activity, adding to global supply-chain disruptions during a peak season for sales of consumer goods. Finally, as higher utility bills are regressive, support to low-income households can help mitigate the impact of the energy shock to the most vulnerable populations.

This article is from the International Monetary Fund blog By Andrea Pescatori, Martin Stuermer, and Nico Valckx.
Read the article at the IMF site with more references HERE