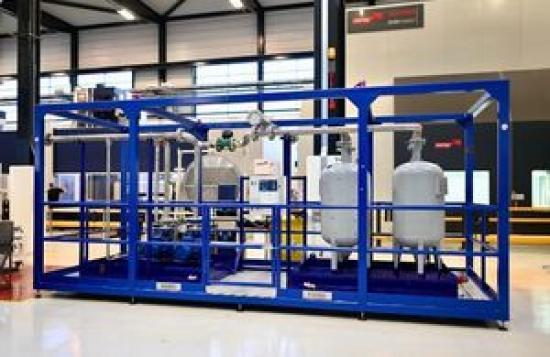 Each small modular reactor could be capable of powering 1 million homes - equivalent to a city the size of Leeds.

Kwarteng: "This is a once in a lifetime opportunity for the UK to deploy more low carbon energy than ever before and ensure greater energy independence."

Next steps in developing the design for one of the world's first small modular reactors (SMR) has been backed by £210 million in new government funding for Rolls-Royce SMR, the UK government has announced today (Tuesday 9 November 2021), delivering on the Prime Minister's Ten Point Plan and creating good high-skilled jobs.

Matched by private sector funding of over £250 million, today's investment will take forward phase 2 of the Low-Cost Nuclear project to further develop SMR design and take it through the regulatory processes to assess suitability of potential deployment in the UK.

New nuclear has a crucial role to play in providing reliable, affordable, low carbon energy as Britain works to reduce its dependency on volatile fossil fuels and exposure to global gas price spikes.

SMRs have the potential to be less expensive to build than traditional nuclear power plants because of their smaller size. Their modular nature of the components offers the potential for parts to be produced in dedicated factories and shipped by road to site - reducing construction time and cost. Rolls Royce SMR estimate that each Small Modular Reactor could be capable of powering 1 million homes - equivalent to a city the size of Leeds.

Today's news comes as Parliament considers the Nuclear Energy Financing Bill which establishes a new financing model for nuclear projects, known as the Regulated Asset Base (RAB). This would attract a wider range of private investment into these projects, reducing build costs, consumers' energy bills and Britain’s reliance on overseas developers for finance.

The UK is investing millions into the nuclear industry, including up to £1.7 billion to bring at least one large-scale nuclear project to a final investment decision, and a new £120 million Future Nuclear Enabling Fund to provide targeted support towards further nuclear projects as part of the Net Zero Strategy.

This is a once in a lifetime opportunity for the UK to deploy more low carbon energy than ever before and ensure greater energy independence.

Small modular reactors offer exciting opportunities to cut costs and build more quickly, ensuring we can bring clean electricity to people’s homes and cut our already-dwindling use of volatile fossil fuels even further.

In working with Rolls Royce, we are proud to back the largest engineering collaboration the UK has ever seen - uniting some of the most respected and innovating organisations on the planet. Not only can we maximise British content, create new intellectual property and reinvigorate supply chains, but also position our country as a global leader in innovative nuclear technologies we can potentially export elsewhere.

By harnessing British engineering and ingenuity, we can double down on our plan to deploy more home-grown, affordable clean energy in this country.

The SMR programme is one of the ways that Rolls-Royce is meeting the need to ensure the UK continues to develop innovative ways to tackle the global threat of climate change.

With the Rolls-Royce SMR technology, we have developed a clean energy solution which can deliver cost competitive and scalable net zero power for multiple applications from grid and industrial electricity production to hydrogen and synthetic fuel manufacturing.

The business could create up to 40,000 jobs, through UK deployment and export enabled growth. As a major shareholder in Rolls-Royce SMR, we will continue to support its path to successful deployment.

Today’s £210 million grant follows £18 million invested in November 2019, which has already delivered significant development of their initial design as part of Phase One of the Low-Cost Nuclear project.

Today’s investment comes as COP26 continues its focus on science and innovation.

This is extremely welcome news and demonstrates the potential of advanced nuclear power, which could be expanded safely to improve the overall efficiency of our energy system, with cheaper stable low carbon power to help meet the UK’s net zero goal.

This welcome recognition of the innovative approach taken by the Rolls Royce-led team gives the UK a real chance to regain its place at the top table in nuclear energy internationally and create a new manufacturing base for cutting-edge power generation, helping boost our economy and our export potential.

This £210 million contribution from government has been awarded through the Low-Cost Nuclear challenge at UK Research and Innovation.

in May, the UK government declared the Generic Design Assessment (GDA) open to advanced nuclear technologies - including SMRs - for the first time. The process allows the UK’s independent nuclear regulators to assess the safety, security and environmental implications of new reactor designs. Rolls-Royce SMR have stated their intention to enter the GDA process shortly
Generic Design Assessment (GDA) is a process carried out by the Office for Nuclear Regulation (ONR) and the Environment Agency (EA) (the Nuclear Regulators) to assess the safety, security, and environmental protection aspects of a nuclear reactor intended for deployment in Great Britain. It is an upfront, non-site-specific (hence generic) assessment of a design which aims to provide confidence that it is capable of deployment in the UK. This is separate to the planning processes which would need to be completed for any new nuclear project

this programme will support the aims, set out in the Net Zero Strategy, of maintaining options and informing any potential investment decisions during the next Parliament

How the government is kickstarting our nuclear industry:

in the Spending Review, we announced up to £1.7 billion of direct government funding to enable at least one large-scale nuclear project to the point of FID by the end of this Parliament
a new £120 million Future Nuclear Enabling Fund will provide targeted support to address barriers to entry. This fund will be part of the measures to inform investment decisions during the next Parliament on further nuclear projects
the Nuclear Energy (Financing) Bill will introduce a Regulated Asset Base (RAB) model as an option to fund future nuclear projects. A RAB model is a tried and tested method, typically used in the UK, to finance large scale infrastructure assets such as water, gas and electricity networks
the £210 million SMR funding is part of the £385 million Advanced Nuclear Fund - announced last year in the Prime Minister’s 10 Point Plan for a Green Industrial Revolution. We are providing funding for a SMR design and are progressing plans for an Advanced Modular Reactor demonstrator in the early 2030s