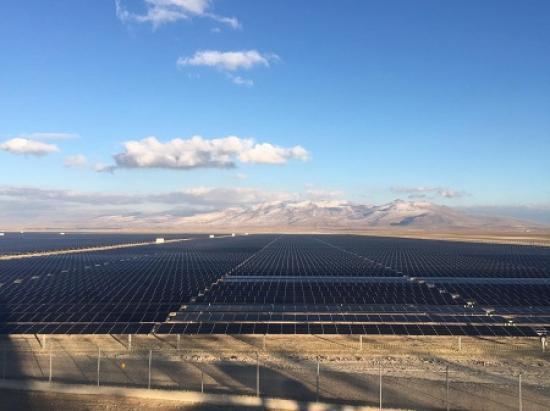 £217 million support is UKEF's largest-ever guarantee for a solar project.

Backing delivers on the UK's commitment at the COP26 to level up support for international climate action
The International Trade Secretary has today (Monday, November 15) announced over £217 million worth of government backing for the largest solar facility in Turkey as the UK starts to deliver on pledges made at COP26.

UK Export Finance’s backing for Kalyon Enerji’s 1.35GW Karapinar solar project is the largest-ever guarantee it has provided for a solar project. UKEF’s guarantee will help support over 100 British jobs as the integration of the solar technology and the assembly of the solar power station will occur in the UK.

Equivalent to over 4,600 football pitches in size, the facility will deliver clean electricity to approximately two million Turkish households when completed in late 2022.

International Trade Secretary and UK International Champion on Adaptation and Resilience for the COP26 Presidency, Anne-Marie Trevelyan, said:UK Export Finance is putting the UK at the heart of the global green energy transition. With over £200 million pounds worth of backing, we are helping to bring solar energy to 2 million Turkish households. Firm action from the UK alone is not enough to fight the climate crisis. UKEF’s financing encourages other countries to invest in renewable energy and opens new markets for UK businesses that will power a recovery underpinned by green jobs.

GE Energy Financial Services supported UKEF to agree the deal, with the UK’s export credit agency set to guarantee a £217 million (US $291 million) Buyer Credit Facility. This will enable GE to deploy its first FLEXINVERTER solar technology outside the US, supporting Turkey’s clean energy goals and facilitating trade for UK suppliers.

The project is part of the first Turkish solar YEKA tender launched by the Turkish Ministry of Energy under the Renewable Energy Resources Zones (YEKA) programme. The project will help Turkey to continue its expansion of renewable energy resources and commission 10 GW of solar capacity between 2017-27, according to IEA.

Guto Davies, Global Public Capital Leader at GE Energy Financial Services, said:GE is proud to be partnering with UKEF again to deliver one of Turkey’s most significant renewable projects and GE’s first FLEXINVERTER solar power station technology outside the US. Our relationship with UKEF enables us to offer GE customers access to diversified and competitive financing for GE projects that deliver sustainable, reliable, and affordable energy.

This announcement comes on the heels of the UN Climate Conference, COP26, where governments and businesses committed trillions of pounds in green investments and more than 40 countries quitting coal. The UK government made new commitments to eliminate climate harm from global finance and take action to support the global energy transition.

The UK’s green exporters will also be at the centre of International Trade Week (November 15-19), where the government is seeking to level up British exports. Over the week, trade exports, ministers and parliamentarians will be hosting events and workshops aimed at everyone from seasoned exporters to those looking to sell to the world for the first time.

Prakash Chandra, CEO Renewable Hybrids at GE Renewable Energy, said:There is tremendous potential for solar energy in Turkey which can be addressed through smart solutions that will help integrate this natural energy source into the grid in a reliable way and at utility scale. We are thrilled to be partnering with Kalyon Enerji on these projects and look forward to more opportunities to increase the penetration of renewable energy in Turkey.

Financing for the project will be structured on a project finance basis and raised through J.P. Morgan as acting lead arranger and lender supported by the UKEF guarantee.

It is headquartered in Connecticut with regional hubs in London, Houston, Washington D.C. and Singapore. For more information, visit GE Finance Services follow us on Twitter @GEEnergyFinServ.

With nearly 40,000 employees present in more than 80 countries, GE Renewable Energy creates value for customers seeking to power the world with affordable, reliable and sustainable green electrons. Follow us at GE Renewable Energy, on LinkedIn, or on Twitter.

About Kalyon Enerji
Kalyon Enerji is established as a result of being directed to energy investments by the vision of providing increasing energy needs of next generations as the population consistently increases every year in Turkey and in the world.

Accordingly, Kalyon Enerji, which concentrates on R&D and innovation works to make clean and renewable energy resources available in a manner to meet all energy needs, concentrates the investments in energy sector on Solar Energy (GES) and (RES) Wind energy as Gas, Hydroelectric, Thermic.

The Kalyon Karapinar Solar Power Plant will prevent 1.5 million tons of carbon emissions annually and, by the end of 2022, increase the share of solar energy in Turkey’s total energy production by 20%. It will ultimately serve the needs of 2 million people.

About UK Export Finance
UK Export Finance is the UK’s export credit agency and a government department, working alongside the Department for International Trade as an integral part of its strategy and operations.

Established in 1919, it exists to ensure that no viable UK export should fail for a lack of finance from the private market. It provides finance and insurance to help exporters win, fulfil and get paid for export contracts.