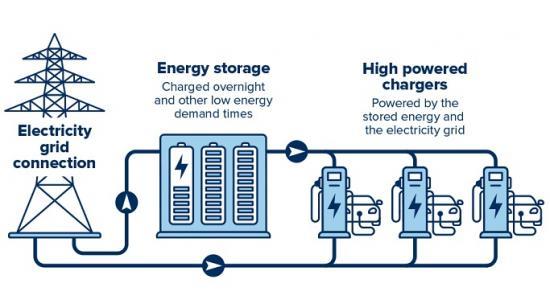 The challenge of finding somewhere to rapidly charge electric vehicles on a long journey could become a thing of the past thanks to a multi-million-pound investment from National Highways.

The government-owned organisation plans to invest in Energy Storage Systems - essentially giant battery packs - for service stations where the grid supply is not enough for rapid charging infrastructure.

The announcement comes following Transport Day at COP26, which focused on the global transition to zero emission transport, an aim of both the government and National Highways. It's hoped the move will bring an end to ‘range anxiety' by improving the network of charge points for EV drivers using England’s motorways and major A-roads.

These rapid chargers are part of Government’s vision for the rapid charge point network in England which set the goal of around 6,000 high powered chargers on the motorway network by 2035.

Malcolm Wilkinson, Head of Energy for National Highways, said:We are working differently and innovating to support the switch to zero emission journeys.

Whilst we have limited control over the number of petrol and diesel cars on the network, by supporting the expansion of the rapid charge points network, we hope to increase EV drivers’ confidence for all types of journeys, both long and short.

These new Energy Storage Systems and the rapid chargers they supply will ensure that motorists are unlikely to be caught without somewhere to charge, which is a fantastic move for drivers and the environment accelerating the speed in which we transition to new electric vehicles.

Transport Minister Trudy Harrison said:Our vision is to have one of the best electric vehicle infrastructure networks in the world and we want charging to be quick and easy for all drivers.

This additional investment will ease drivers’ range anxiety as we continue to power up the green revolution.