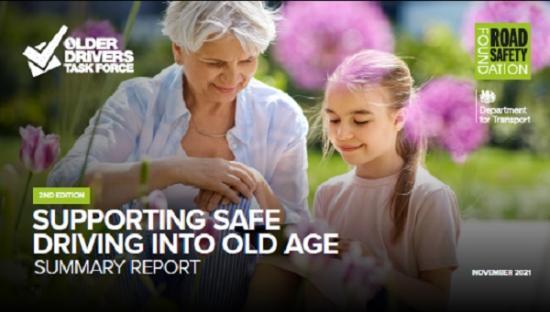 Older drivers (70+) do not pose a significant risk to other road users, but their relative frailty means that they are over-represented in serious crashes - particularly those over 80.

For drivers over 80, the rate of being killed or seriously injured, per licence held, is as high as for those aged 21-29.

Serious injuries among the young reflect inexperience; for older drivers it's about their fragility

We have an ageing population so expect huge increases in licences held by older drivers.

So older driver deaths will increase if we do not take decisive action now.

Car driver deaths in the 70-79 age group are forecast to increase by 40% over the next 20 years, and by more than a quarter in the 80+ age group

A series of recommendations will help curb these increases.

Setting targets to reduce deaths and serious injuries for drivers over 70 by 50% by 2030 and to have a longer-term aspiration for zero deaths by 2050 is a key recommendation in Supporting Safe Driving into Old Age, a summary report issued today by a team of experts funded by the Department of Transport.

introducing mandatory eyesight testing with an optometrist or medical practitioner providing a driver ‘MOT' of eyesight at licence renewal at the age of 70 and at further renewals;
a programme of making T junctions safer - a notorious risk-point for older drivers;
immediate research into the impact of physical and cognitive medical conditions, including diabetic peripheral neuropathy, that may contribute to pedal confusion;
standardised content for Driving Appraisals and certified and trained instructors to assist older drivers;
and a national roll-out of an alternative to prosecution for careless driving for older motorists.

For vehicles, the report also recommends that the government takes on board:

EU standards of vehicle safety technology and further research into advanced occupant restraint systems such as split buckle or crisscross seat belts in recognition of the frailty of older drivers and passengers.

The Older Drivers Task Force was originally commissioned in 2016 to make its recommendations, acknowledging the importance of people living an active and healthy life into older age, and that age itself does not give an indicator of how fit a person is to drive. The aim is to support older drivers to continue to drive while they are still safe to do so.

Today's report is published by the Road Safety Foundation which led the Task Force. Executive Director Dr Suzy Charman says: "There have been some developments since the previous review, but we want to increase the pace of progress to ensure that we do not see the expected rise in the number of older drivers killed or seriously injured in road crashes. Key recommendations such as introducing mandatory eye tests at licence renewal at aged 70 are considered essential and lifesaving.

"We hope the Department for Transport welcomes the report and can provide the leadership necessary to ensure these recommendations are taken forward. Not only will this make driving safer for older drivers, but it will also provide a legacy of safer roads for generations to come."

John Plowman, chair of the Task Force, says in the report foreword: "I am grateful for the contributions of all members in following up the review and to the Road Safety Foundation for their support throughout our work. We are ready to help in whatever way we can to support the action now needed to make driving safer for older drivers, a vulnerable and growing sector of our community."