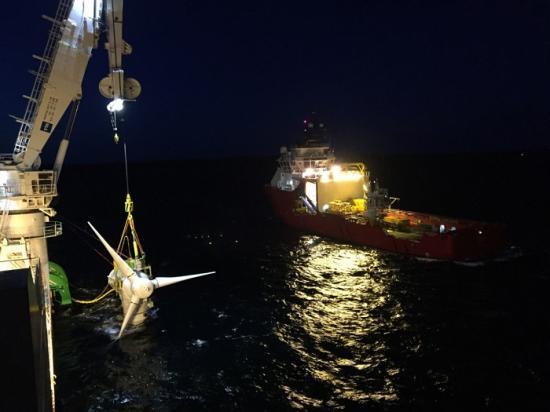 The UK Government will invest £20 million per year across the UK in Tidal Stream electricity as part of its flagship renewable energy auction scheme, kickstarting a brand-new chapter for Scotland's tidal industry and creating jobs across Scottish coastal regions.

The announcement will unlock the potential for a thriving Scottish tidal power sector, with the cash boost supporting marine technologies which could benefit the whole of Scotland and the rest of the UK.

As part of the fourth allocation round of the Contracts for Difference Scheme due to open next month, the UK Government will ensure that £20million per year will be ringfenced for Tidal Stream projects, giving Scotland's marine energy sector a chance to develop their technology and lower their costs in a similar way to its world-leading offshore wind industry. This will bring the total funding for this allocation round to £285million per year UK-wide.

Scotland has long been a pioneer for tidal technology, hosting the world's largest tidal stream generating station which was built in 2018 thanks to a £10 million innovation grant from the UK Government and extensive support under the Renewables Obligation mechanism - the highest level of support awarded to any technology.

In fact, the UK has the largest tidal stream deployment in the world, so much so that almost 50% of the world's installed tidal stream capacity is in Scottish waters. Furthermore, just this year Simec Atlantis Energy Ltd, a homegrown company used their expertise to export and install a tidal turbine - designed and built in Scotland - for piloting in Japan.

Over time Scotland's marine technologies have the potential to significantly contribute to the UK's decarbonisation commitments and will support hundreds of green jobs across the country, with projects currently in development in North-West Scotland, North Wales and the Southern coast of England.

Tidal energy has the potential to be a very reliable source of generation, given the clockwork predictability of the tides. Including this in Scotland's low-carbon energy mix will make it easier to match supply with demand, building on the UK Government’s commitment to build a strong, home-grown renewable energy sector to reduce the reliance on fossil fuels and exposure to volatile global gas prices.

We hope to see marine energy follow in the successful footprints of other renewable technologies, where we’ve seen costs fall dramatically in recent years thanks to UK Government support.

The investment today provides a major push for Scottish tidal power to become a key part of the next generation of renewable electricity projects needed to strengthen energy security as we work to reduce our dependency on volatile fossil fuels.

Scottish Secretary Alister Jack said:This UK Government allocation of funding for the tidal industry in Scotland, and across the UK, is tremendous news. Harnessing the powers of our seas is a vital step in our transition to the use of greener, cleaner energy and underlines the UK Government’s commitment to create and protect highly-skilled jobs while on our journey to Net Zero by 2050.

With strong wind and solar power industries in the UK it is the natural next step to explore our tidal energy capabilities. It’s an exciting development in support of our domestically-produced renewable energy sources.

The Contracts for Difference (CfD) scheme is the Government’s primary method of encouraging investment in low-carbon electricity. The scheme has helped to deliver substantial new investment and reductions in the costs of capital for some renewable technologies, such as helping to reduce the price of offshore wind by 65%.

This fourth round of the Contracts for Difference Scheme will open on 13 December 2021. The UK Government will launch this auction process with the ambition of supporting up to 12GW low-carbon electricity capacity - more than the last three rounds combined.

The costs continue to fall as green technology advances, with solar and wind now cheaper than existing coal and gas power plants in most of the world. This is thanks to clear government signals and investment made ahead and during the COP26 climate change summit, along with targeted support that boosts private sector investment, creates high-quality jobs and builds industries and technology as the UK builds back greener from the pandemic.

History has illustrated the effectiveness of the scheme’s design in keeping costs down - between the first allocation round in 2015 and the most recent round in 2019, the price per unit (MWh) of offshore wind fell by around 65%.

Energy Minister Greg Hands, said:The development of Scotland’s renewables industry is a major UK success story, with our renewable energy auction scheme playing a vital role in the UK becoming a world leader in clean electricity generation and helping to bring down prices for consumers.

Today’s dedicated backing for tidal stream power is opening up a new chapter for Scotland’s coastal communities and advancing the possibilities for the Scottish marine energy sector to play a significant role in delivering the UK’s green industrial revolution.

CEO of Renewable UK, Dan McGrail said:This is a major step forward for the UK’s world-leading tidal energy industry, allowing us to ramp up the roll-out of our cutting-edge marine technologies and increase the pace of innovation in the sector to become more cost competitive. Ring-fenced funding for tidal stream doesn’t just unlock private investment and secure green jobs today - it also puts us in pole position to capitalise on exports to the global market in due course. That’s why we’ve been calling for this dedicated pot of funding for tidal power.

We need a range of renewable technologies to get us to net zero as fast as possible. As an island nation with superb tidal energy resources to harness, it’s clear that tidal stream should have a key role to play in our shift to clean energy.

Chair of the UK Marine Energy Council, Sue Barr, said:The impact of this support cannot be overstated. Here in the UK we have the knowledge, skills, people and projects to lead the world in marine energy, but we have been missing a vital piece of the puzzle to unlock investment and allow the sector to scale-up and deliver. The marine energy sector stretches the length and breadth of the UK - from the Isle of Wight to Orkney and Shetland.

This dedicated ringfence will secure our domestic market, support decarbonisation and will enable tidal stream energy to develop; delivering export opportunities, green jobs, and economic growth in the process. We are grateful to Ministers and the broader UK Government for having listened, understood and acted. This new support for tidal stream brings us one step closer to delivering a Great British success story that will provide both environmental benefits through the generation of renewable energy alongside UK-wide supply chain benefits.

Contracts for Difference (CfD) contracts are allocated through a competitive auction process where the cheapest projects in each technology group are awarded contracts first, with the auction designed to ensure competitive pressure to keep costs down and protect consumers.

The fourth CfD round aims to increase the capacity of renewable electricity awarded contracts from the 5.8GW achieved in the last round to around 12GW.

Renewable projects are subject to strict planning controls that afford protections to local communities and the environment and guidance will ensure communities are engaged with and are able to benefit from renewable infrastructure in their area.

CfDs give greater certainty and stability of revenues to electricity generators by reducing their exposure to volatile wholesale prices, while protecting consumers from paying for higher costs when electricity prices are high.

The £20 million additional ringfenced budget is for Tidal Stream projects, not Tidal Range (which is a different technology). Tidal Range projects are not eligible to enter into the CfD scheme.

The £20 million Tidal Stream ringfenced budget, and the £285 million total figure, are presented in 2011/12 prices in line with the Control for Low Carbon Levies. These figures are an estimate of annual support in the most expensive year in the first four years following deployment. Actual annual figures will vary over the 15 year lifetime of the contract depending on future wholesale electricity prices, and outcomes of the competitive auction process.