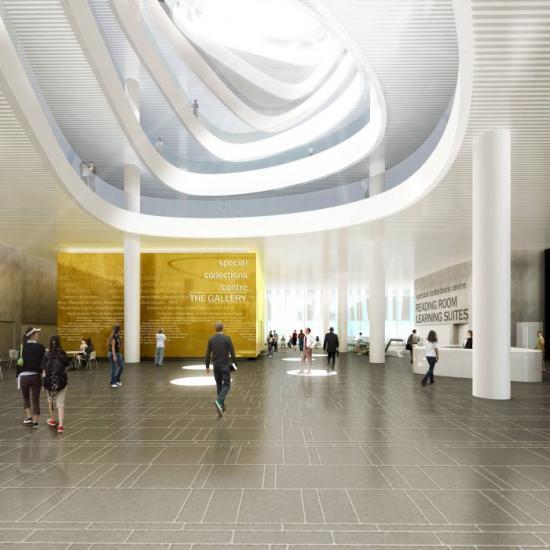 The North's world-renowned building stone is demonstrating its versatility by featuring in a Ł57 million Scottish project to create a flagship library for the University of Aberdeen.

Caithness Stone Industries has secured a multi-million pound contract to provide both building and specialist finished stone for key areas of the development. The Wick-based business, which employs 30 local people, will provide walling and flooring for the new library project.

Designed by the leading Danish architectural practice Schmidt Hammer Lassen, the new library will provide state of the art facilities for the 14,000 student community, replacing the existing Queen Mother Library. It will provide a 21st century learning and research environment for students, staff and visitors. Conceived as a cube evoking the ice and light of the north, the new library building has a sharp, modern design, and a striking interior of sweeping contours around an asymmetrical atrium which rises diagonally from the public ground floor through the floors above.

John Sutherland, of Caithness Stone Industries, commented: "The architects have designed a visionary 21st century building. With the range of specialist equipment we have and our own in-house design team we are delighted to play our part in creating a library of which generations to come can be proud."

Caithness Stone Industries, which has four quarry sites in the far north of Scotland, is pro-active in growing its business and has been working with Highlands and Islands Enterprise (HIE) to develop its business.

Hilary Budge of HIE is delighted the business has won such an important contract.

"Caithness stone is one of our area's oldest traditional industries and has been exported all over the world. It is great news that its importance as a quality Scottish product is leading to increased orders. Caithness Stone Industries is exploring more business opportunities than ever before. HIE is delighted to have supported them in buying some of their specialist equipment and in supporting their design work through our graduate placement scheme," she said.

Creating a magnificent new library spearheads the next phase of the University's ambitious investment programme to develop the infrastructure to match its academic aspirations. Professor Christopher Gane, Vice-Principal and academic lead for the library project said. "I am delighted that the University is working in partnership with Caithness Stone Industries in building an iconic, intellectual and cultural facility for both the University community and for scholars and the wider public throughout the world.

"We are determined that the benefits of this exciting new building stretch beyond our staff and students to all who live and work across the north of Scotland.

"The support of individuals and businesses based in the north of Scotland is proving an important component in further strengthening partnerships between the University and major players in the economic, cultural and public life of Scotland."

Planning consent has been granted for a new life sciences innovation centre on Inverness Campus.   The 2500mÂ˛ facility is a joint project between Highlands and Islands Enterprise (HIE) and the University of the Highlands and Islands.
[Advisory / Counseling Services]
20/11/2020

Cairngorm will benefit from more than ÂŁ20 million to make it a year-round attraction, generating significant economic benefits for the local area and Scotland's tourism sector.   Funded by the Scottish Government and Highlands and Islands Enterprise (HIE), more than ÂŁ16 million of the investment will be used to support reinstatement of Scotland's only funicular railway and bring it back into service during winter 2021-22.
[Advisory / Counseling Services]
23/9/2020

A project to create accommodation facilities at Kishorn dry dock in Wester Ross has secured investment of up to ÂŁ94,675 from Highlands and Islands Enterprise (HIE).   Having on-site accommodation will enhance the dock's capacity and help it attract more high-end contracts in offshore renewables and oil and gas decommissioning.
[Advisory / Counseling Services]
13/9/2020

A free programme to help businesses accelerate their growth has opened for new applications, with a virtual taster session arranged for 24 September 2020.   Developed by Highlands and Islands Enterprise (HIE), the Pathfinder Accelerator programme provides fast-track training and mentoring and will be delivered completely online.