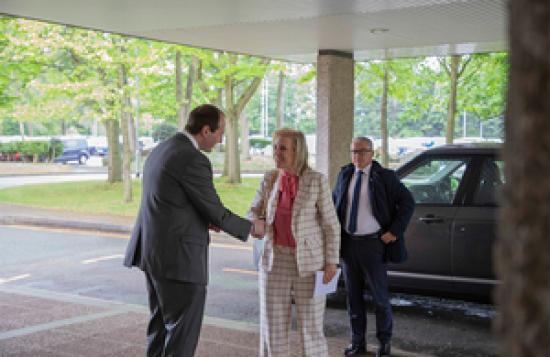 The Princess experienced a rare close-up of the Joint European Torus (JET), the largest and most powerful operating fusion energy machine in the world.

Representative of His Majesty the King, The Princess was today able to experience a rare close-up of the Joint European Torus (JET), the largest and most powerful operating fusion energy machine in the world.

There were 12 Belgian scientists directly involved in the record-breaking fusion energy results announced earlier this year.

The tour was arranged as part of the Belgian Economic Mission, the first of its kind since Brexit and the pandemic, and raised the importance of fusion energy in delivering an environmentally responsible future energy supply.

Ian Chapman, CEO, UKAEA, said: "It was an honour to discuss the benefits of fusion energy with Her Royal Highness and the delegation from the Belgian Economic Mission. Belgium is an important partner in the global mission to achieve commercial fusion power and in ensuring the world has access to a safe, sustainable and low carbon energy supply."

Sara Moradi, Interim Head of the Fusion Science Department, EUROfusion, said: “It is good to see growing interest in fusion in my adopted country. Currently Belgium contributes to the EUROfusion programme both generally and specifically within the fields of ion cyclotron resonance heating in the JET and Wendelstein 7-X devices at ERM/KMS, and material research at SCK CEN.”

The ground-breaking research being done at UKAEA with partners across the globe represents a huge opportunity for the economy.

The UK energy industry invests £13bn annually, delivers nearly £30bn in gross value added on top of the nearly £100bn in economic activity through its supply chain and interaction with other sectors. It supports more than 700,000 jobs across the country.

Belgium ranks highly as a UK foreign trade partner. In 2021, it was the UK’s seventh largest client of goods worldwide and sixth largest supplier of goods. The Belgian Economic Mission aims to increase Belgian export to the UK with HRH offering her support.