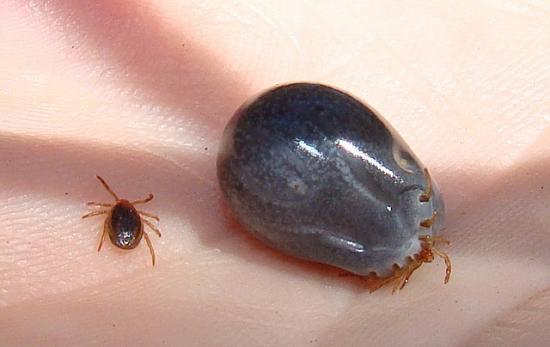 A Highland led Lyme Disease initiative has been given the go ahead to roll-out across Scotland and England. The GP based scheme is a collaboration between NHS Highland, Scotland's Rural College (SRUC) and Pfizer Inc. and aims to capture accurate case numbers as well as making the diagnosis of Lyme Disease easier and improving the consistency in the way the disease is managed.
The ‘Lyme Disease General Practice Sentinel Scheme', which is being funded by Pfizer Inc., has completed its pilot phase, which involved a trial in 15 GP practices across NHS Highland. Interim results have been positive and the project will be rolled out to GP practices across Scotland and England during the coming weeks. The group hope to report on the initial findings of the pilot project at a scientific conference in the near future.

Practices taking part in the scheme receive a Lyme specific training package as well as being provided with a digital guidance and data capture tool, specially developed by Scottish informatics experts Albasoft Ltd and adapted and supported in England by Cegedim Healthcare Solutions. The tool helps to guide clinicians through a consultation when Lyme Disease is suspected or has been confirmed via a blood test.

Lyme Disease can develop if someone is bitten by a tick infected with the Lyme causing bacteria. It can be difficult to diagnose as patients with Lyme Disease often visit their GP with a rash that can vary widely in its presentation, or with a range of vague and seemingly unrelated symptoms. Patients often have no recollection of a tick bite.

Dr James Douglas, GP with NHS Highland and the Sentinel Scheme Project lead clinician, said: "The Pilot phase of the project indicated that the use of the tool was broadly accepted by GPs who generally found it easy to use and helpful to aid decision making in what can be a tricky diagnostic process. It is important we try to support diagnosis in any way we can since Lyme can be easily cured with antibiotics if it is caught early."

One of the main aims of the project is to gain more accurate Lyme case numbers. Although we know Lyme Disease is relatively common in some areas of the UK, information on exactly how many patients are getting early stage Lyme Disease each year is unclear.

NHS Highland Project Manager, Sam Holden said: "Our initial results show that we can collect good quality data on Lyme Disease cases in General Practice. This means we can capture all the cases that are diagnosed by GPs based on clinical history as well as those diagnosed via laboratory blood test results, supporting evidence that the number of cases reported has, until now, represented an underestimation."

It is the team’s expectation that this project will give the most accurate estimate to date of the number of new cases of early Lyme Disease in a sample of the UK population.

It is also hoped the project may help lead to better understanding of the epidemiology of Lyme Disease by giving information on groups of people who are at increased risk of acquiring it and would benefit from Lyme prevention education.

Dr Douglas added: “It is important that we have a clear understanding of the scale of the problem and that we can identify risk factors associated with Lyme Disease. This will help direct public education in the prevention of Lyme Disease and aid early diagnosis so that people can enjoy and gain health benefits from outdoor activity while minimising the risk of Lyme.”

The roll-out phase of the project aims to recruit a total of 40 practices in Scotland and 10 in England who will be asked to collect data on cases of Lyme Disease until the end of 2022.