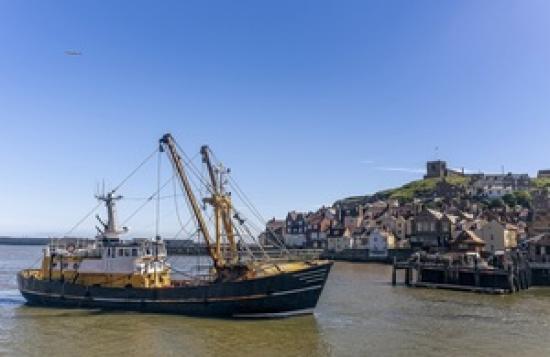 Projects to help minimise the impact of lost fishing nets on the environment and innovative research into new trawl designs to reduce the number of other species accidentally caught by fishermen (bycatch) are among those to receive funding from the £100 million UK Seafood Fund, the UK Government announced today (Wednesday 3 August 2022).

The Fisheries Industry Science Partnerships (FISP) scheme - which is part of the £100m UK Seafood Fund - brings together industry and researchers to deliver pioneering projects which promote the sustainable management of the UK's fisheries and help equip the fishing industry for the future.

So far over £4 million has been made available by the UK Government to fund projects under the scheme. From today, a new funding round for the FISP is opening, with increased awards of up to £1 million for two-year projects and new eligible funding areas, allowing for a wider variety of more ambitious projects to receive support. The UK Seafood Fund will also be extended from 2024 until 31 March 2025 to help longer-term projects to succeed by giving them more time to use the investment.

In Shetland, one of the largest fishing communities in the UK which landed around £100 million of fish in 2019, Fisheries Minister Victoria Prentis today visited projects supported through the scheme and heard directly from local fishermen.

Fisheries Minister Victoria Prentis said, "Our world-class fishing and seafood sectors are packed full of expertise and innovation, and the UK Seafood Fund is making sure these excellent schemes have the financial backing needed to succeed.

We are already seeing tangible results - from LED lights in fishing nets to attract target species and deter bycatch through to novel whelk pot designs.

I want our fishing industry to thrive, to be more sustainable and to invest in the people who will make it a success for decades ahead - so I encourage everyone to bring forward their pioneering ideas.

UK Government Minister for Scotland Malcolm Offord said:
It's fantastic to see four Scottish projects benefiting from nearly £270,000 of UK Government investment. It will not only cement our fishing industry’s reputation as one of the best in the world, but also elevate its potential even further.

From research into maximising cockle stocks by the University of Glasgow to monitoring Ling on Shetland with the University of the Highlands and Islands, there is so much hard work going on in Scotland to benefit the industry everywhere.

And this is only the start. With the extension of the UK Seafood fund into 2025, I want to encourage more Scottish innovators to present their plans for funding.

Following the initial launch of the FISP scheme in 2021, when approximately £1.4 million was allocated, a number of ground-breaking projects are already underway and making significant progress.

For example, SafetyNet Technologies is exploring a new type of fishing net using LED lights as an effective tool to deter unwanted fish and prevent bycatch. FISP funding has been used to host workshops with scientists based in Aberdeen and to conduct sampling trips ahead of starting commercial trials on lobster and squid vessels this month.

Successful bidders from FISP Round 2, announced today, include:

CEFAS will work with a group of skippers in the Farn Deeps nephrops (langoustine) trawl fishery off the north-east coast of England to test selective trawls, chosen from designs that have demonstrated potential to reduce unwanted catches in limited scientific trials.

The Holderness Fishing Industry Group are partnering with the University of Hull to help identify practices to reduce the impact of lost shell fishing gear (LSG) and assess hidden costs to the industry and individuals.

Bangor University and partners will research the impact of towed fishing gear – such as scallop dredging and beam trawling - on blue carbon in seabed sediments.

Dr John A. Terschak, Project Leader of the Yorkshire Ghostfishing Initiative, said, "The Holderness Fishing Industry Group is pleased to have received Defra support towards our industry-led efforts to address the factors that contribute to static gear loss; reveal the impacts of lost gear to the environment, the industry, and the wider economy; and identify practices and measures that could potentially reduce the chances of losing gear in the future.

Our Yorkshire Coast fishers are committed to ensuring the marine environment remains healthy and productive in order to continue to provide for their families as they have for generations past.

Larissa Kunstel-Tabet, Project Manager at Safety Net Technologies said, "The successful outcomes of our workshops and agreed sampling protocols have paved the way for an exciting project and the trials ahead. Working closely with the skippers and scientists, there is a building excitement to get out on the boats, begin the trials and collect the data.

Round 1 of the Skills and Training Scheme will also launch today, with up to £5 million to be made available to invest in training to develop and improve courses to upskill the industry in essential skills. Round 2 of the Infrastructure Scheme, which seeks to build capability across the UK fishing sector supply chain, will open in September. All projects will benefit from the extension of the UK Seafood Fund until March 2025.